Elena Delle Donne, a forward for the Washington Mystics in the WNBA has been taking to social media and guest appearances to speak out about a debate that has recently been sparked within the WNBA community.

Adam Silver, NBA commissioner, sparked a response from Delle Donne when he suggested that the problem the WNBA league has connecting with fans and gaining public support and attention is related to marketing issues.

Delle Donne, however, thinks the problem lies in other areas and used her twitter platform to express her disagreement suggesting that the foundation of the issue is more financial, saying that “[the women of the WNBA] absolutely do not get promoted like [their] counterparts do . . . When you put millions of dollars into marketing athletes and allow fans to get to know the players on the court they develop a connection. When you have a connection with someone or something you are more engaged and continue to want to learn/see more. Fans feel like they know NBA players. How is anyone to get to know [the women of the WNBA] if [they] aren’t marketed nearly as much?”Moreover, Delle Donne spoke out about the issue while guesting on ESPN’s Outside the Lines stating that young women simply haven’t seen the players of the WNBA because they are not supported or promoted enough, and echoed her statements on her twitter that “yes [the WNBA] is a business. But like any business you have to invest to get a return. This goes for EVERY industry. Not just the WNBA. #seeher #investinwomen”

As Delle Donne, the Mystics and all other women of the WNBA continue to seek equality in promotion, financial support, and marketing, they are also in the middle of a busy pre-season, with the official WNBA season tipping off on May 18th. Training camps have opened around the league and pre-season is underway! Preseason will continue until Sunday with the Las Vegas Aces facing off against the Dallas Wings at 3:00pm ET. 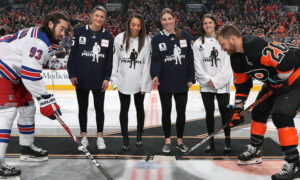