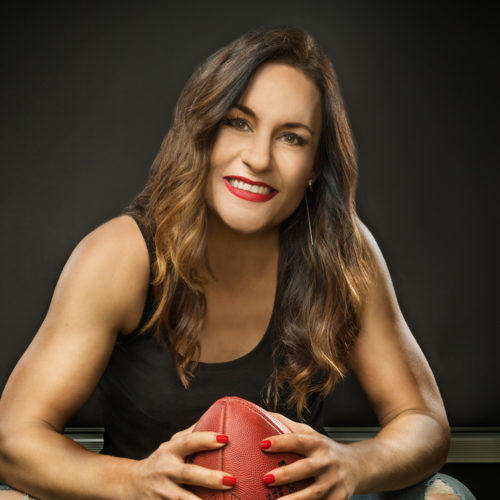 Like most people, the name Jen Welter was not one I recognized and definitely not one that I associated with the NFL – until now.

I was recently introduced to Jen Welter as I waited (impatiently) for guest speakers to be announced for a Women’s Conference in New York and was intrigued by the image of this speaker who was holding a football helmet and wearing an Arizona Cardinals jersey.

Not only was she the first positional coach in a men’s professional football league and the first female coach in the NFL, she was also the first female linebacker to ever be signed with a professional men’s football team and she has two gold medals after competing for Team USA in 2010 and 2013 at the International Federation of American Football’s Women’s World Championships. And still most people know very little about the sports doctor plowing through glass ceilings and taking a male-dominated sport by storm.

The 40-year-old Florida native started her professional athletic career at Boston College, where she began playing women’s rugby. In a video produced by the NLF network, Welter says that while at Boston University she fell in love – “not [with] a boy, but with a sport”. And that sport is football – a sport she’s grown up with, a sport she’s been told she won’t ever play, a sport she refuses to stop playing.

In 2001 she joined the Massachusetts Mutiny women’s football team and then spent the next ten years playing for the Dallas Diamonds until 2012. During the summer of 2010, she competed in her first IFAF Women’s World Championship, winning her first gold medal with the US national women’s football team. She would go on to win another gold medal with the US national team in 2013.

The next year, Welter would break through the doors of one of the most male-dominated sports in the world. In the 2014 postseason, Jen Welter tried out for the Texas Revolution, a men’s professional football team. On January 24th, she was signed as the first female running back on a men’s professional football team. She was only the second female player in the league. In signing with the Texas Revolution, Welter became the first female player in football to play a “contact” position, and second in all sports, after hockey player Hayley Wickenheiser. Not only was she showing the world that women can play in men’s leagues, but she proved that women are fully capable of handling the same contact and force as men.

After a year of breaking through the glass ceilings of men’s professional football, Welter set her eyes on the highest calibre of play in football: the National Football League.

On July 27th, 2015 the Arizona Cardinals, coming off a 11-5 season, announced Dr. Jen Welter would be the assistant coaching intern for the 2015-16 training camp and pre-season. She stayed with the team until regular season, carrying them through the pre-season with a 3-0 record. The biggest concern bringing her on as a coach was whether the players would respond to her and therein lies her greatest victory. Dr. Welter’s success not only represents a willingness for superior, skilled coaches – regardless of gender – but represents that male players can and will respond well to a female coach, especially one who has unparalleled experience and success in the sport.

I grew up around football; it was one of the first sports I learned to play, when it was football season there was always a game on TV at my house, we used to play all the time at recess in middle school, my brother played, and my dad coached for years. I remember going to all my brother’s and my dad’s games and I only saw one girl playing on their team. I remember asking if I could play, I remember my little sister asking if she could play and the answer was always the same: football’s too rough.

She carries that positivity and message now to younger generations through her football camps and motivational speaking. Her goal is to empower young girls to “play BIG, dream bigger and provide the game plan to turn their dreams into a reality.” Her success as a player, as a coach and as a woman give all football-loving girls and women hope that one day, the sport will become more equal towards female players.