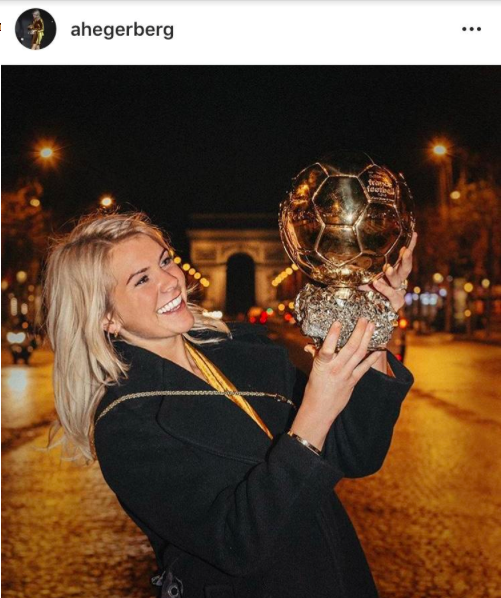 The Ballon d’Or — considerably the most prestigious award in professional soccer — is historically known for commending the incredible achievements of exclusively professional male soccer players . . . until now.

On December 3, 2018, Norwegian native and Olympique Lyonnais striker Ada Hegerberg was honoured with the first women’s Ballon d’Or. The award has been dominated by male players since 1956, given out by France Football; a magazine that covers worldwide soccer news. The Ballon d’Or is presented to the player who performed the best in the previous year, which is decided by votes from multiple national team coaches and captains, as well as international journalists. For over 60 years, female players were never considered for this prize, adding to the controversy of lack of recognition for the achievements of female athletes in soccer, and other sports in general.

Female athletes are not only ignored for their achievements, they are often degraded even when they do receive accolades. For example, Spanish U17 player Eva Navarro finished third in votes after Dimitri Payet and Cristiano Ronaldo for UEFA Goal of the Season for her goal against Germany in the UEFA European Women’s U17 Championship. Finishing in the top three among ten nominees in Europe is extremely impressive, but instead of congratulatory remarks, there were many hateful comments. I remember scrolling through Instagram and seeing her goal, ecstatic that a woman was being recognized, however the comments from mainly male fans changed my mood instantly. Many of the comments belittled Navarro’s goal because the opposing team’s defense was not as talented as their male counterparts. The attitude seemed to be that her goal was easy and not impressive because the female defenders were “slow” and “didn’t know how to defend.” Multiple male egos became bruised as they witnessed a professional soccer player beat two defenders and hammer a shot into the top left corner. Oh, and that player just happens to be a woman. Jealousy is in the air as women’s soccer is continuing to build a better name for itself and I’m here for it.

Even though Navarro did not win Goal of the Season, she definitely sparked interest in female soccer players leading up to the inaugural Female Ballon d’Or presentation.

This year’s Ballon d’Or award was especially exciting and controversial for both men and women for shocking reasons. For the past ten years, the men’s award has been dominated by Lionel Messi and Cristiano Ronaldo, who both earned five trophies. Despite another fantastic year from the pair, Croatian Luka Modric took home his first Ballon d’Or, ending their reign. While this was a pivotal moment for the men’s side, in my eyes nothing tops the first woman being recognized for the same award. The list of nominees included 15 exceptional female players across 11 nationalities. Star-studded forwards such as Lindsey Horan, Lieke Martens, Marta and Christine Sinclair all made the list, but Ada Hegerberg took the grand prize.

Hegerberg capped off an incredible 2017/2018 season in May by helping her French club team, Lyon, win their third straight and fifth overall UEFA Women’s Champions League title, the most in its history. Not only did she win her third straight Champions League trophy, she also scored a record of 15 goals for the 2017/2018 tournament. For Lyon, in their regular season as part of French league Division 1 Feminine, Hegerberg was also the top goal scorer with 31 goals, leading Lyon to yet another division champion title.

Many people have commented on her exceptional abilities, including Jean-Marie Aulas, President of Lyon’s club, as well as her fellow teammate and Lyon captain, Camille Abily.

“Ada has a physical and mental strength above the norm. She is on her way to becoming the best player in the world.” -Jean-Marie Aulas, Lyon president

“A young player, but already a great player. It’s impressive to see just how mature she already is in her play. An exceptional goalscorer.” -Camille Abily, Lyon captain

The moment Hegerberg was handed the Ballon d’Or, it seemed as though this would be remembered as one of the most triumphant moments in women’s soccer history. While we took a giant leap forward for female athletes, the move was momentarily stagnant after an inconsiderate comment was made from the host, DJ Martin Solveig. He asked Hegerberg if she wanted to celebrate her win with a dance, but included a remark wondering if she knew how to “twerk.”

Hegerberg seemed nonchalant following the comment, replying with a simple “no,” and members of the audience, including 19-year old Paris St. Germain player, Kylian Mbappe, looked confused and possibly uncomfortable. Almost immediately after the event, outrage sparked across social media including Twitter and Instagram regarding the “twerking” comment. Many people voiced their disapproval towards Martin Solveig and following the mass of angry tweets and comments, Solveig posted an apology video.

In the apology, Solveig claims that the comment was just a joke and that he did not mean to offend anyone. Fans, however, were not buying it. Thousands of people who replied were not impressed with the 53-second apology; although, Hegerberg herself did not seem bothered by the comment.

“He came to me afterwards and was really sad that it went that way. I didn’t really consider it sexual harassment or anything in the moment. I was just happy to do the dance and win the Ballon d’Or.”

When I first heard about the Ballon d’Or finally being given to female players, I was beaming with excitement. Growing up, my soccer role models were all male because that was what I was exposed to. I have known about the Ballon d’Or award for years and it is almost impossible not to come across a headline about the male winners.

This award is not only important for professional female soccer players, but it is crucial in building awareness for the younger generations. I wish that female players were recognized for such a prestigious award when I was a young soccer player so that I had more female influence to look up to. I imagine that my motivation to be the best would have been even higher if I could have seen a woman receive acknowledgement for everything that men did. This is exactly how Hegerberg feels, hoping that this achievement will encourage young girls to follow their dreams.

“It’s incredible,” she said. “This is a great motivation to continue working hard and we will continue to work together to win more titles. I wanted to end with some words for young girls around the world: believe in yourselves.”

While many of the articles circling the media revolve around the controversial and considerably sexist twerking comment, this should not be the main takeaway. What is most important is that history has been made for women’s soccer, and it has been a long time coming. This moment was crucial towards increasing the level of recognition for women’s achievements in all sports and we cannot allow an ignorant comment to divert our attention. Yes, we still have work to do in terms of accepting the capabilities of female athletes and yes, we must stop the criticisms and comparisons to men. It is not about who is faster or who is stronger; it is about the hard work and dedication shown by these tremendous athletes. Instead of focusing on the hatred and jealousy that is still vocalized towards female athletes, we must revel in the fact that slowly, but surely, women are continuing to make their mark in the sports industry.