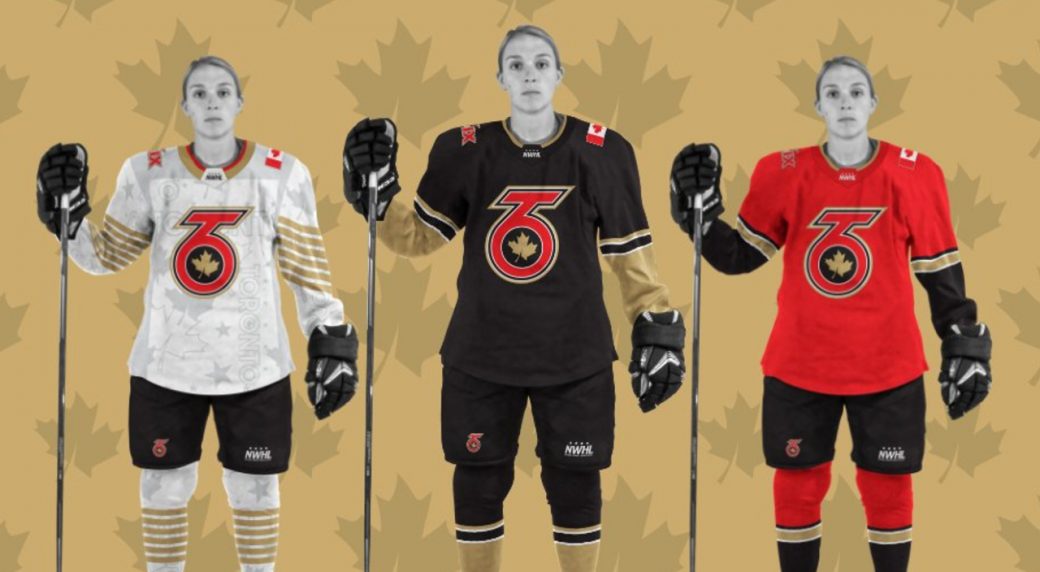 The Toronto Six unveiled their jerseys this week for their inaugural season. (Photo credit: Toronto Six/Twitter)

In case you missed the top news stories and happenings across women’s hockey last week, here’s an overview of everything from each day during the week of Jun. 22 to 26, 2020.

The Toronto Six agreed to a contract with forward Breanne Wilson-Bennett, who tallied 20 points in 21 games last season with MODO Hockey of the SDHL. Wilson-Bennett played her fourth and final college hockey season with Colgate University in 2017-18.

American goalie Nicole Hensley—formerly of the NWHL’s Buffalo Beauts—will be returning to the PWHPA for another season. A pair of Canadians, forward Kim Deschênes and defender Erin Ambrose, have also re-signed with the PWHPA.

In addition to Hensley’s PWHPA re-signing, she appeared as a guest on an episode the Hockey Think Tank podcast with Topher Scott. Hensley discussed her hockey career, including her perspective as a goalie, and the current state of the women’s game.

Shortly after Taylor Wenczkowski was selected 18th overall by the Boston Pride, she agreed to her first NWHL deal. The Pride also signed 29th overall pick, forward Meghara McManus, who was Wenczkowski’s teammate with the New Hampshire Wildcats.

Canadian forward Mélodie Daoust—a two-time Olympic medallist—has committed to the PWHPA for a second season. American defender Lee Stecklein and Canadian goalie Amanda Makela will also return for another year with the PWHPA.

Defender Alyson Matteau may have gone undrafted this year, but she has signed a contract with the Beauts for the 2020-21 season. Matteau has spent the past four seasons with the University of Maine, captaining the team in her senior year.

Canadian goalie Ann-Renée Desbiens and American forward Kendall Coyne Schofield, both known for impressive showings at the NHL All-Star Skills Competition the previous two years, will be returning to the PWHPA for each of their second seasons in 2020-21.

On Sports Talk with Erica L. Ayala, former NWHL player and two-time Isobel Cup champion Harrison Browne appeared as a guest in a two-part episode. He discussed several topics related to social justice, including racism and transphobia in hockey.

After a season with the SDHL’s Göteborg HC, defender Samantha Fieseler will return to North America next season with the Metropolitan Riveters. Forward Nicole Guagliardo, recently selected 25th overall by the Connecticut Whale, also signed in the NWHL.

Canadian forward Laura Dostaler—formerly of the CWHL’s Calgary Inferno—has decided to return to the PWHPA. American forward Alexa Gruschow and Canadian defender Renata Fast also re-signed with the PWHPA for the 2020-21 season.

Two days after re-signing with the PWHPA, Mélodie Daoust was a guest on Sportsnet’s Ask 31 with Jeff Marek and Elliotte Friedman. She shared many experiences during her hockey career, such as the thrilling gold medal game at the 2014 Winter Olympics.

While there weren’t any signings in the NWHL on this day, the Toronto Six officially unveiled their uniforms of the team’s inaugural season. They also launched a team store filled with various merchandise, including hats, tees, hoodies and accessories.