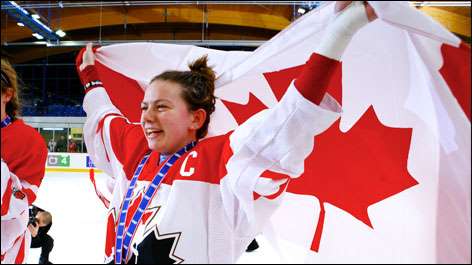 In case you missed the top news stories and happenings across women’s hockey last week, here’s an overview of everything from each day during the week of Jul. 6 to 10, 2020.

The Connecticut Whale reunited with forward Alyssa Wohlfeiler, signing her to a contract for the 2020-21 season. Wohlfeiler appeared in her first NWHL season with the Whale in 2015-16, spending 2019-20 with the Boston Pride after returning from Europe.

Canadian goalie Molly Jenkins will join the PWHPA in 2020-21, which is preceded by her final season with the University of Windsor. Canadian forward Nicole Kosta and American defender Kacey Bellamy will return to the PWHPA for another year.

The Metropolitan Riveters announced the re-signing of defender Kiira Dosdall-Arena for her sixth NWHL season. As an original NWHLer, Dosdall-Arena has been with the Riveters since the league’s inauguration, scoring 25 points in 80 regular-season games.

In a partnership with HERSTORY Museum, the Toronto Six announced a new digital publication to promote its brand. Its focus will be the intersection of women’s sports, business and inclusion, set to be unveiled in August and free for subscription sign up.

After a successful rookie campaign, 22-year-old forward Iveta Klimášová re-signed with the Buffalo Beauts for another season. The Slovakian National Team member tallied 18 points in 24 games during the 2019-20 season, finishing third on the Beauts in scoring.

The PWHPA welcomed American defender Breanna Scarpaci to the organization after completing her senior year at Boston University. Canadian defenders Halli Krzyzaniak and Lauriane Rougeau will also return to the PWHPA for each of their second seasons.

The Pride announced the re-signing of goalie Victoria Hanson, who boasted a 6-0 record and 0.919 save percentage in her rookie season. Hanson is from Massachusetts and is an alumna of Boston University, playing in 69 games during her college career.

For the upcoming 2020-21 season, the PWHPA announced a trio of re-signings. American forward Hayley Scamurra, Canadian forward Tracy-Ann Lavigne, and American defender Megan Keller are all returning to the organization next year.