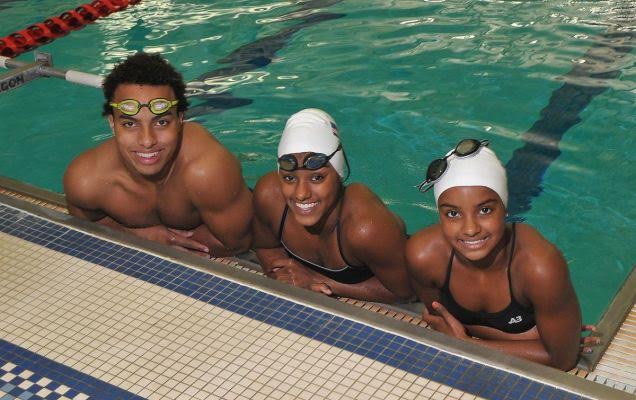 From left to right: Troy, Latroya, and Jalya Pina will represent Cape Verde at the Olympics as the African island nation’s first swim team. (Photo courtesy of The Black Detour.)

Latryoa Pina is used to leading. The eldest of her three siblings, she is the first person in her family to learn to swim and the first to attend college. Now, after her mom posted results and videos of their family swimming on Facebook, Latryoa, her sister Jayla and brother Troy will be the first swimmers to represent Cape Verde in the 2020 Tokyo Olympics.

The small African nation is making a push to increase awareness about the sport, even though they are currently in the process of building the country’s first competitive swimming pool. Those that wish to train, usually do so in the ocean.

Latryoa was taking gymnastics, but excelled in the water after learning to swim at the local Boys and Girls club. Her mom, Maria Alfama, quickly got heavily involved.

“I don’t even know how to swim!” Alfame told the Sun Chronicle. “[…] My life began when they got involved in sports and swimming. I was a super sports mom.”

While her mother’s enthusiasm and posting of results online may have caught the attention of the Cape Verde national team, Latryoa was already making waves.

She attends Howard University in Washington, one of the only historically black colleges and universities (HBCU) to have both a men’s and women’s swim team.
​
After growing up in a predominately white town of Seekonk in Massachusetts, Howard University provided the community and familial-like support Latryoa was looking for in a college experience miles away from home. She has had success in the 100m breaststroke and 200m individual medley at several events, although it is not known yet which events she will swim at the Olympics.