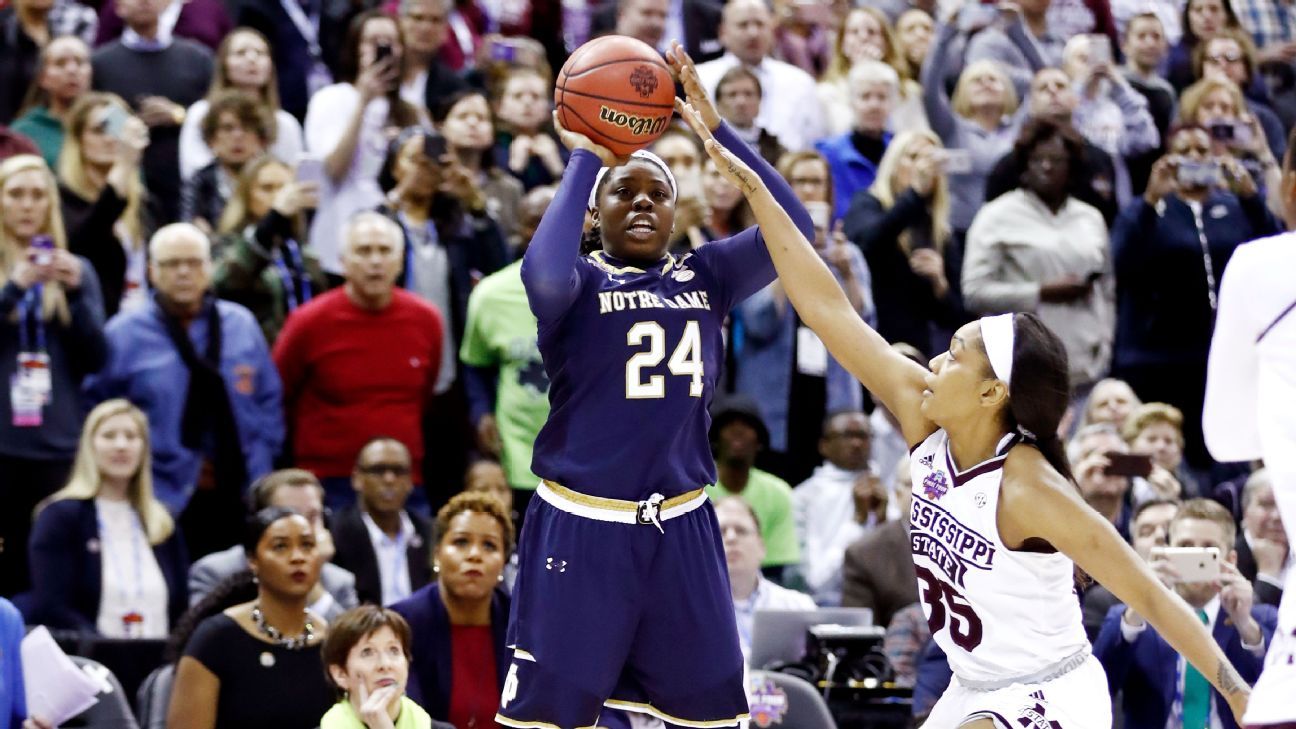 After all four #1 seeds made the final four last year, a pair of exciting overtime games saw Notre Dame outlast Connecticut and Mississippi State survive Louisville before they met in the finals. A veteran-filled Fighting Irish squad beat Mississippi State 61-58 to win their second national championship in program history.

That’s enough of a history lesson, though. It’s time to get excited about the upcoming NCAA season, which should be full of even more drama if we’re lucky. Read on to find out more about the top teams in each conference.

ACC
The Atlantic Coast Conference is the deepest conference in terms of elite talent and quality depth in the middle. It sent eight teams to the tournament, which was the most of any conference. The conference is loaded at the top, with the defending champions and Louisville, which is always a top-10 team.

Notre Dame is lead by a quarter of seniors: Arike Ogunbowale, Brianna Turner, Jessica Shepard, and Marina Mabrey. Ogunbowale broke out during the NCAA tournament hitting clutch shots to help propel her team to victory on her way to Most Outstanding Player for the tournament and ACC Female Athlete of the Year. Turner, a 2016/2017 All-American, is returning from an ACL injury suffered during the 2017 tournament which forced her to redshirt last season to recover.
​
For Louisville, they will rely on reigning conference Player of the Year Asia Durr who will be competing in her final season for the Cardinals. Louisville won the ACC tournament last year and will be looking to repeat that.

A group of teams will be looking to challenge, including Syracuse, North Carolina State, Duke, Miami, and Florida State.

SEC
Mississippi State lost in the national championships, which was a tough blow, but they also lost four starters from that game to graduation. The Bulldogs will look to Teaira McCowan as they attempt to make a third straight trip to the national finals.

The other major contender in the conference, South Carolina, will be looking to replace the current WNBA Rookie of the Year, A’Ja Wilson, who graduated after last season.
Tennessee (finished ranked #12), Texas A&M (14), Missouri (17), Georgia (18), LSU (24) are all ready to compete to varying degrees.

PAC 12
This might be the conference with the most predictable race in the country, with the number of starters returning for top contenders in Oregon, Stanford and Oregon State. The defending regular season and tournament champion Oregon Ducks will return four starters, including Sabrina Ionescu. Ionescu was an All-American, and for good reason after setting the career NCAA women’s record for triple-doubles in only her sophomore season. She will have a good chance to set the career record if she can reach 13 total this season.

Stanford finished half a game behind Oregon during the regular season and lost in the championship game. The Cardinals will be returning 12 players from last year’s roster as they look to make their 12th straight sweet 16. Oregon’s other challenge will come from their biggest rival: Oregon State. The Beavers will return four starters from a team that is coming of an elite eight loss to Notre Dame. The Beavers did lose their leading scorer and rebounder from last season — Marie Gullich — and will rely on junior’s Mikalya Pivec and Kat Tudor.

BIG 10
This is a deep conference that is lacking a truly elite team and may struggle beyond Maryland on a national stage. Defending champion Ohio State Buckeyes lost to first team all-conference players, Kelsey Mitchell and Stephanie Mavunga, as well as second team all-conference Linnae Harper. Those three helped the Buckeyes win the conference and finish 10th in the polls, but they were upset in the second round of the national championships.

The only other team to finish in the top 25 was Maryland, which will be led this year by Kaila Charles. Charles was first team all-Big 10 last season and is one of four returning starters for a Terrapins squad that had a three-year streak of conference titles snapped.

The main challenge will come from Iowa, which is lead by preseason player of the year pick Megan Gustafson. The senior was a consensus All-American and is the reigning conference player of the year after a dominant junior season. The Hawkeyes will also be returning six of their top seven scorers last season.

BIG 12
After Baylor and Texas both finished in the top 10 last season, second and eighth respectively, they were only able to advance to the elite eight but look to be in good shape again this season. Baylor lost only one game heading into the national championship, but couldn’t get past Oregon State. Baylor is returning their top two scorers from last year: senior Kalani Brown, who averaged over 20 points per game, and rising junior Lauren Cox.

Texas will have to survive the graduation of Ariel Atkins but should still be in good shape for this season. Grad transfer Danni Williams from Texas A&M should help, but the team will be looking to seniors Lashann Higgs and Jatarie White to make up for the absences of their top two scorers from last season.