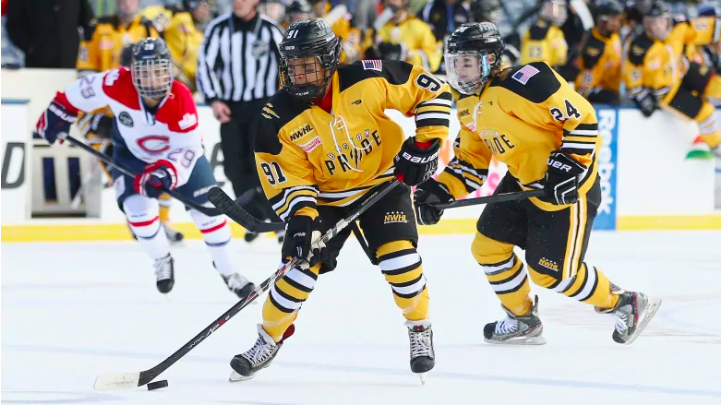 The Boston Pride currently lead the NWHL with a record of 7-0-0. (Photo courtesy of Maddie Meyer/Getty Images.)

Following a short break in the NWHL’s schedule, this weekend will feature a pair of road games for the Buffalo Beauts. They’ll face off against the Boston Pride on Saturday and then travel to Connecticut for a meeting with the Whale.

The gap was intended to accommodate for the 2019 Four Nations Cup in Sweden, but the hosts cancelled due to a dispute between its hockey federation and the players. Here’s an overview of the NWHL standings after 14 total games played in October.

This season has gone as well as the Pride could’ve hoped, winning all seven games to begin the 2019-20 campaign. They’ve won every game by two or more goals, outscoring their opponents 36-13 in the process.

Sophomore forward McKenna Brand leads the way with seven goals and 13 points, while rookie goalie Lovisa Selander boasts a 0.949 save percentage. The Pride seem poised to chase their first Isobel Cup victory since 2016.

It’s been a decent start for the league’s defending champions, but the expectations are much higher compared to last year. The Whitecaps’ power play is at 35 percent – the highest rate of any team – and their penalty kill is second-best in the NWHL.

If Minnesota hopes to repeat as champions in 2020, they’ll need goalie Amanda Leveille to start looking more like herself. A save percentage of 0.909 isn’t abysmal, but it’s well below the 0.923 she posted in 16 games last season.

Since the NWHL’s inaugural season, the Isobel Cup Final has featured the Beauts in all four championship games. Buffalo has only come away with one victory in 2017, most recently losing against the Whitecaps in 2019.

Their biggest hurdle this year will likely be the Pride, as the team has lost two matchups against Boston this season. The Beauts’ other three games were against the winless Connecticut Whale, meaning they’ve only seen the best and worst teams so far.

With only one win in five games, the Riveters’ struggles from last season have carried over into this season. They’ve taken a noticeable dip since their Isobel Cup win in 2018, with only five wins in 21 games dating back to the beginning of last season.

Kendall Cornine is averaging a goal per game, while Madison Packer leads the team with six points. Aside from a few solid individual performances, the Riveters haven’t been a cohesive unit and have the league’s worst goal differential at minus-15.

During the 2018-19 season, the Whale only managed to win two games and ended on an 11-game losing skid. Other than a 7-2 loss against Minnesota, the Whale have remained fairly competitive in most of their games this season.

Special teams have been an issue for Connecticut, as their power play has converted at 10.3 percent and their penalty kill’s success rate is at 47.6 percent. Both are worst in the league and need to drastically improve if the Whale hope to start winning games.