What were you doing at 15? How about at 13? 11? It most likely wasn’t committing to University or signing a six-figure endorsement deal with Nike, but for Olivia Moultrie these things were her reality.

The young soccer star from Canyon Country, California has been focusing on a career on the pitch for as long as she can remember. In fifth grade, Olivia’s parents began home schooling her so she could focus more on the game she loved, at eleven she committed to NCAA Women’s soccer powerhouse program The University of North Carolina Tar Heels. At thirteen, she turned pro and signed a six figure endorsement deal with Nike that made her the youngest athlete ever to sign with the brand.

Shortly after signing with Nike, Olivia and her family moved to Oregon where she began training with the Portland Thorns of the NWSL. Over the past two years, Olivia has taken part in training sessions and pre-season matches but has been prevented from signing a professional contract due to an NWSL rule that prohibits players under the age of 18 from putting pen to paper. Last week, the now 15-year-old filed a lawsuit against the NWSL alleging that the league’s age rule violates antitrust laws and hinders her career development. Her lawyer also argued that if she was male, she would already be playing in the MLS. Moultrie’s lawyer makes a strong case.

The MLS does not have an age requirement rule, and many players under the age of 18 have made their debuts in the league. Fellow American attacking midfield Freddy Adu signed a professional MLS contract, made his debut and scored his first professional goal for D.C. United all at the young age of 14. Alphonso Davies, FC Bayern Munich and Canadian Men’s National Team superstar, made his MLS debut for the Vancouver Whitecaps at 15, the same age as Moultrie.

The discussion of whether a fifteen-year-old who has yet to fully mature not only physically, but more importantly socially and psychologically, should be competing against women two and three times her age is a hot button topic.

The discussion about gender equity in the USA and why it’s alright for male players and not female players to play professionally underage is another.

Whatever your perspective is, the ultimate question remains: Is age just a number? If you’re good enough, are you old enough? 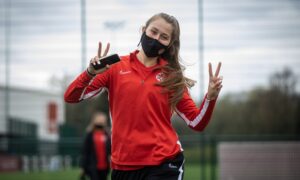