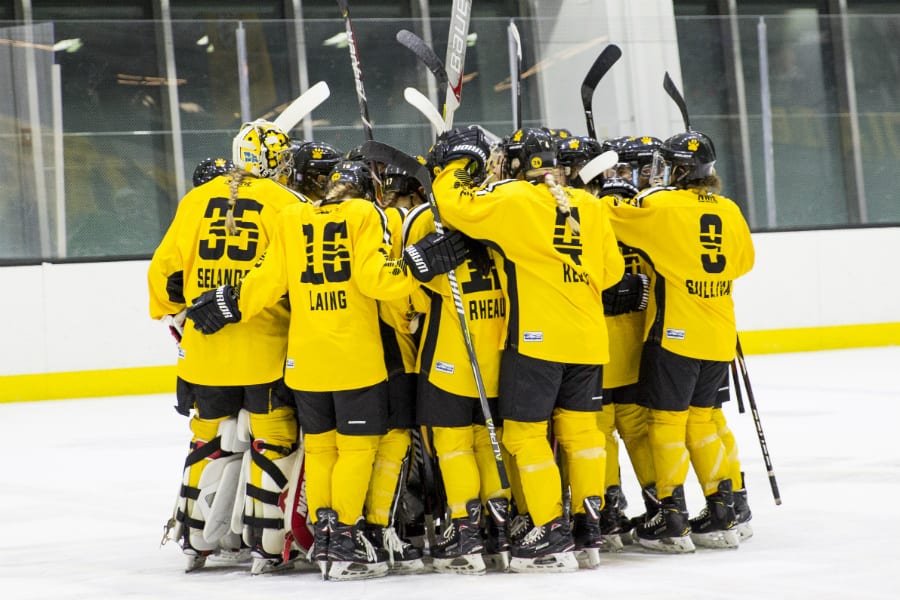 The Boston Pride remain the most dominant team in the NWHL. (Photo courtesy of The Hockey News.)

The Boston Pride remains undefeated after their 8-3 win over the Metropolitan Riveters on Saturday. As for the Connecticut Whale, they lost their tenth straight in a 3-2 loss against the Riveters on Sunday. It’s likely the Pride will be the top seed in the 2020 Isobel Cup Playoffs, while the Whale will be featured in the play-in game.

For most of the Riveters’ matchup with the Pride, they held their own and were outshot by a slim margin of 33-31. Christina Putigna opened the scoring for Boston, but Kendall Cornine answered for the Riveters. Mary Parker’s goal with just over five minutes left in the opening period secured a 2-1 lead for Boston heading into intermission.

The second period was a much different story, as Boston decided it was time to open the floodgates. They scored six goals on 14 shots, eventually taking a five-goal lead into the final frame. Kate Leary and Cornine each scored for the Riveters, but the Pride’s offensive onslaught was too strong for the Riveters to handle in the defensive end.

To begin the third period, the Riveters decided to swap goalie Sam Walther for their backup Dana Demartino. She stopped all eight shots, but the Riveters weren’t able to convert on any of their nine shots. Parker earned the game’s first star with two goals and two assists, while Alyssa Wohlfeiler and Jillian Dempsey each had three points.

Less than 24 hours after their loss, the Riveters travelled to Danbury Ice Arena to face off against the Whale. A goalless first period saw the Riveters outshoot the Whale 12-2, with rookie goalie Brooke Wolejko standing her ground for Connecticut. This included five saves during the course of two power plays for the Riveters.

Before the middle frame’s 12-minute mark, Madison Packer and Cornine each had a goal to give the Riveters a two-goal advantage. Emma Vlasic scored a crucial power play goal for Connecticut with 1:03 left in the second period. It was a much better effort from the Whale, directing 11 shots at Riveters starting goalie Walther.

A penalty against Connecticut in the dying seconds resulted in a Riveters power play being carried over to the third period. Only 33 seconds into the final frame, Kaycie Anderson scored a shorthanded goal to tie the game for Connecticut. Despite the Whale’s comeback attempt, Cornine replied with the eventual game-winning goal.

This weekend, the Riveters will visit the Minnesota Whitecaps for a pair of games. It’s possible for the Riveters to leapfrog Minnesota in the standings with two regulation wins. The Whale return to action on Dec. 21, also against the Whitecaps, while Boston will resume their schedule on the same day against the Buffalo Beauts.