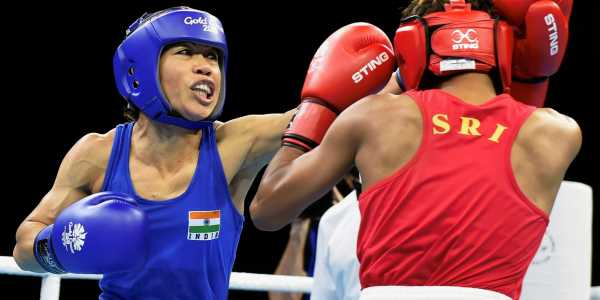 Mary Kom of India will be the favourite in this year’s AIBA Boxing Championships (Photo courtesy of The New Indian Express).

Starting Nov. 15th and going until the 24th some of the top female boxers will face off across 10 weight classes in the biannual tournament which in New Delhi, India.

The main attraction of the event will be India’s own Mary Kom, who is tied for the overall record for golds with five. Kom hasn’t medaled since 2010 but still has a chance to set the individual record with a sixth gold.

India will also be looking to repeat their success that they achieved when they hosted in 2006. They lead all nations with four gold medals, including one from Kom, to go along with eight overall — the best of any nation.

Some other names to know include defending gold medalist Alessia Mesiano of Italy, Nazyum Kyzaiba of Kazakhstan.

A quartet of medalists from the 2016 Olympics will be competing in Finland’s Mira Potkonen, Russia’s Anastasia Beliakova, Netherlands’ Nouchka Fontjin, and Colombia’s Valencia Victory.

With the high number of boxers that go pro it is hard to determine an exact ranking to determine the favourites. So instead, there are some countries that historically have found success. In 2016 Kazakhstan and China led with six medals each, except Kazakhstan had four golds to China’s two. The only other country with more than two medals was the United States, which finished with five.

Over the first nine tournaments held, Russia has been the clear leader when it comes to winning gold. They have 21 while China has 13. If you want to look at total medals, the top two remain the same, having collected 53 and 40 medals respectively, with a second class forming of the United States (32 total medals), India (28), and Canada (25) rounding out the top five.

Nine countries will make their debut this year, including Scotland, Kosovo, Malta, Bangladesh, Cayman Islands, Congo, Mozambique, Sierra Leone and Somalia. These new editions are contributing to the record number of participants expected to compete over the two weeks. Just under 300 are expected to compete for over 70 nations as the sport continues to grow.