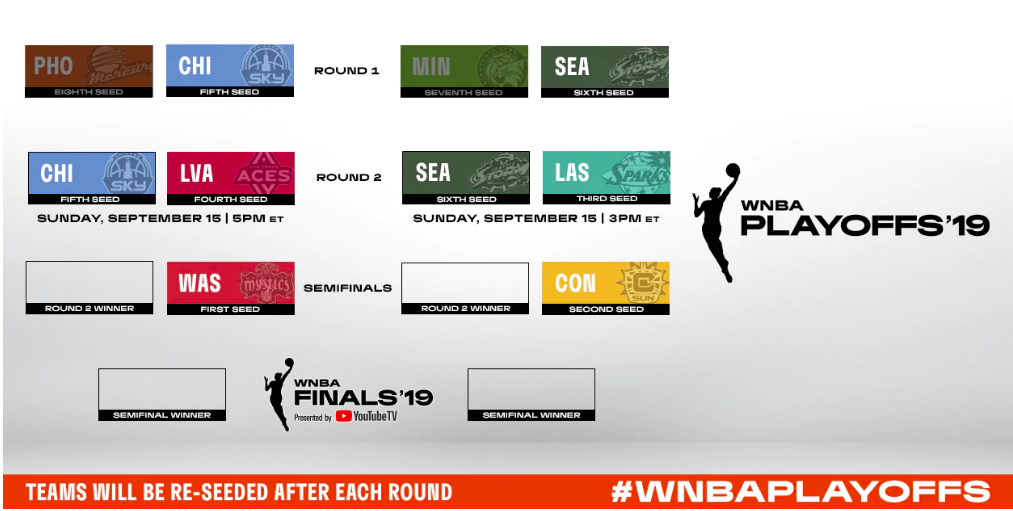 One more round of single eliminations to determine who joins Washington and Connecticut in the final four will take place on Sunday. First at 3 p.m. ET, Seattle travels to Los Angeles looking to continue their title defense. In the second game of the afternoon, at 5 p.m. ET, the Las Vegas Aces will host Chicago Sky in a game featuring two teams with three All-Stars a piece.

A first-round matchup with a Phoenix team missing one star quickly got out of hand in the second when Brittney Griner went down. The Sky are arguably the most athletic team left in the playoffs and can score in bunches. The Sky are led by the All-Star duo of Courtney Vandersloot, coming off consecutive seasons of setting the assists record, and sharp-shooter Allie Quigley.

After making the biggest splash in the offseason by acquiring Liz Cambage in a trade from Dallas, the Aces went about finding a way to play with their new talent. Cambage is joined up front with last year’s Rookie of the Year, A’ja Wilson, but the duo has struggled playing together at times. The bench with Dearica Hamby and Kelsey Plum will force any team to play a full 40 minutes.

Due to injuries to Wilson and Jantel Lavender, both out for the year, these teams only played once at even strength. Wilson was working her way back from an ankle injury but put up 25 points and eight rebounds off the bench to help the Aces win 100-85. The lesson from that game for the Sky is that, although it’s tough to score, they have had some success with DeSheilds scoring 28.

The Aces had the top defensive rating in the league, while also leading in points allowed in the paint and second-chance points. Chicago must find a way to use their defense to create quick chances to score. like they did against Phoenix in the first round. In that game, they scored 25 in transition alone. The final key for the upset will be one of Stefanie Dolson, Astou Ndour, or Cheyenne Parker finding a way to limit Cambage who has scored 28 and 23 in the last two meetings.

Seattle got a career game from second-year point guard Jordin Canada as she scored 26 points to lead the Storm past Minnesota. Another strong game from Jewell Loyd, who put up 22 along with Howard, could help the Storm defend their title.

A 4-6 start can be ignored due to the addition of Chiney Ogwumike, who eventually found a role on the bench, with the return of Candice Parker from injury. Beginning at the end of July, the Sparks ran off a stretch of 12 wins in 16 games, including seven of nine to end the season.

If Seattle wants a chance at the upset, they will need to have their defense playing to its full potential. It will start with the 2018-2019 Defensive Player of the Year, Natasha Howard, who along with Mercedes Russell will have to find a way to limit Parker and Nneka Ogwumike. Parker put up 20+ points in both Sparks wins compared to 1-11 shooting in their lost, her second game back from a pre-season injury.

Los Angeles will need to be careful with the ball as the Lynx learned last round how aggressive the Storm will be on defense. Both teams like to cause havoc. Seattle is second in opponent TO% while Los Angeles is third, but in their first-round matchup the Storm only committed 11 against the league’s top team in the same stat.