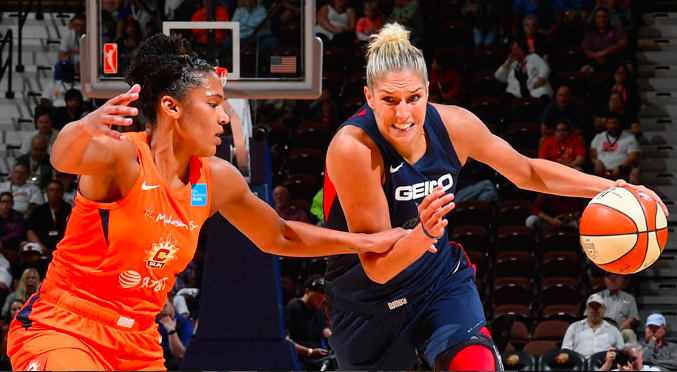 They say if it’s not broken don’t fix it and the two teams battling it out for the title have followed that method. The Washington Mystics and Connecticut Sun returned to almost their entire lineups from last season and the chemistry has led to success.

Washington will get home court advantage after finishing with the best record in the league this year, and are the favourites heading in. Another key takeaway from the Mystics having home court advantage is that the Mystics went a league best 12-5 on the road. On the other hand, the Sun finished tied for first in the league with a 15-2 record at home but only went 8-9 on the road.

All that is good for stat heads, but what will truly decide the series is the play on the court. Both teams operate as a complete unit with each member on the court contributing to the success.

The first question with this match-up will be if Washington plays a small roster with Elena Delle Donne at power forward and Ariel Atkins at small forward. This would force Delle Donne to go up against Alyssa Thomas down low. Although Thomas would be at a height disadvantage, the physicality she showed in the sweep of Los Angeles could be tough over potentially five games for the MVP.

The other option for Washington would be to play Emma Meesseman in the starting lineup at power forward. The Belgium star was absent during the finals last year to play with the Belgian national team. Her play in the last round was a key reason the Mystics beat the Las Vegas Aces in four games, as she scored over 22 points in all three wins, including a new career high 30.

WHAT THE TEAMS WILL HAVE TO FOCUS ON

The guards of Connecticut will have to do their best to limit the ball flow of Kristi Toliver and Natasha Cloud, as the pair are capable of driving, shooting from deep and setting up teammates at a high level. Forcing Delle Donne to do more playmaking may not seem desirable, but it can be better than letting the whole team beat you.

Toliver had moments against the Las Vegas Aces where it looked like she was fully healed from a bone bruise that caused her to miss the final 11 games of the season. Unfortunately, the rust was still evident as she forced shots at times and struggled to slow down Kelsey Plum. If Williams can attack the same way, Connecticut can match the high scoring of Washington.

LaToya Sanders will be key for Washington on the boards going up against one of the top rebounders in the league: Jonquel Jones. Jones is an even stronger rebounder than the Mystics encountered in Liz Cambage of the Aces, which put the team on its heels. Jones ranks third in rebounding percentage and fifth in offensive rebounding percentage.

THE DECIDING FACTORS FOR A CLOSE GAME

When adding up all the matchups and how they should play out, it becomes clear why Washington finished the year in first place and was such a force. Any style of play should suit them due to their overall offensive firepower. The adaptability of the Mystics roster will help them win this series in four tight games.