For the FIFA international fixture break this past week, Mexico visited Europe and had the opportunity to face Slovakia and Spain in friendly matches.

Mexico started its journey with Monica Vergara as head coach in February, winning her first game 3-1 against Costa Rica at Azteca Stadium and a goalless draw also with the Costa Rican side.

The first game of this set of fixtures was played in Austria against Slovakia. “El Tri” found some opportunities to open the scoring especially in the second half where both teams had chances near the end of the game, but unfortunately the result was a scoreless draw.

Vergara talked with the media after the game and mentioned that they are looking for more international games with this kind of rival to help the team improve, playing against different types of setups, and giving opportunities for more players to compete.

Spain was the second match on Mexico’s agenda, and they met in Marbella for this match. Mexico played extremely well in the first half, defending each opposition attack and also creating opportunities that were not capitalized upon.

After half time everything changed — the local team became more dangerous, finding the opener with Marta Cardona in the 68th minute. Ten minutes later Nahikari Garcia scored the second for Spain, and in the last minute Garcia found the net for her second goal of the day for a final score of 3-0.

Vergara mentioned that she was very proud of her team as they never gave up and fought until the final whistle, being conscious about the level of Spain. She considers that the board of the Mexican National Teams is doing a great job finding this type of friendlies with squads that are important and that can be a real challenge for “El Tri.”

Mariana Gutierrez, Liga MX Femenil director, tweeted that she and the league feel proud of the future that is visible for the female organization. There is no doubt that the job has been undertaken correctly — they’re on the right pathway with a process that is going to take time, but certainly will pay off.

The Mexican women’s national team took a major part of the roster that Vergara announced for the games played, in consideration of 15 players of the 22 that were called. Thankfully, Liga MX Femenil has become the home for many players that want to achieve a place in Mexican soccer history, having the goal to overcome the group stage in a World Cup for the first time. They have qualified on three occasions since 1991, (when FIFA started organizing the competition) without a single victory yet in the competition.

Hopefully Mexico will participate in more games of a similar calibre for the next FIFA date that is supposed to be held in the month of June, but for now, Vergara has been a success with one win, two ties, and just one defeat. This is a process that has just started, but looks quite promising for Mexico’s future. 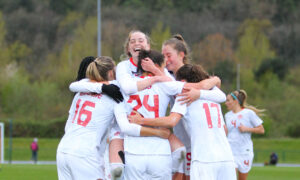