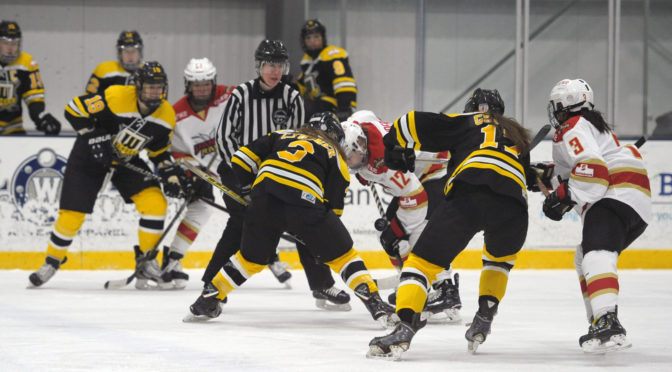 This past weekend, a pair of CWHL games were broadcast across Canada on Sportsnet. This was the first-ever CWHL weekend on Sportsnet and displayed the league’s top two teams, as well as many of hockey’s stars.

The first game, airing Saturday, Jan. 5, was between Les Canadiennes de Montréal and the Toronto Furies. The second game aired the next night, Jan. 6th, and was a face-off between the Calgary Inferno and the Markham Thunder.

In Saturday’s game, Les Canadiennes de Montréal defeated the Toronto Furies in a 3-1 victory on home ice. Montréal captain Marie-Phillip Poulin carried the team by scoring a hat trick, while Anne-Sophie Bettez had three assists. Les Canadiennes goaltender Emerance Maschmeyer stopped 18 out of 19 shots and was named the game’s third star. Carolyne Prevost scored the lone goal for the Furies on her second of the season, with help from Julie Allen’s assist. Toronto goaltender Shea Tiley faced a total of 27 shots, but allowed three goals in her team’s loss.

During Sunday’s game, Markham jumped out to a 2-0 lead in the first period. The Inferno then charged back with five unanswered goals to seal a 5-4 win for Calgary. Inferno forward Brianne Jenner had two goals and Rebecca Johnston had a goal and an assist. Calgary goaltender Alex Rigsby was able to stop 30 out of 34 shots, whereas Markham goaltender Liz Knox made 34 saves out of 39 shots in total. Thunder forward Jamie Lee Rattray and defender Laura Fortino each scored one goal and had two assists, while defender Megan Bozek picked up her first goal of the season and also had an assist.

There are two professional women’s hockey leagues in North America, yet they have largely been ignored by broadcasters in both Canada and the United States. Aside from the Olympics, female hockey players aren’t given the opportunity to demonstrate their abilities to a national audience. Not only is it crucial for these leagues to grow economically through an increase in television broadcasts, but it’s important in the development of women’s hockey more generally.

In the growth of women’s hockey, the importance of a national broadcasting cannot be undermined. If the CWHL becomes more accessible on television, this would have a profound impact on women’s hockey. Fans of the game would be given another option for watching professional hockey and, more importantly, women and young girls in hockey would have role models and see they’re capable of working in the sport one day.

While it’s great that Sportsnet partnered with the CWHL for the broadcasting of these games, there is still a lot of progress to be made. The fact that, in 2019, it’s disappointing that this is a noteworthy story. It’s time for those in powerful positions within professional hockey, such as broadcasters, to help in growing the women’s game.