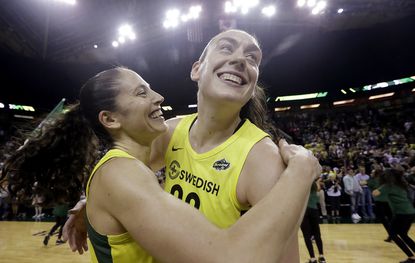 After the Seattle Storm won the franchise’s third WNBA championship in 2018, a repeat in 2019 wasn’t out of the question. Breanna Stewart—the Storm’s first overall pick in 2016—was the league’s MVP during the regular season and WNBA finals. Veteran point guard Sue Bird was an All-Star and remained a vital player in Seattle’s lineup.

However, misfortune struck and completely shifted the trajectory of Seattle’s 2019 season. Stewart suffered an Achilles injury during a Euroleague game in April 2019, while Bird announced she would undergo knee surgery in May 2019. As a result, both Storm superstars missed the entire 2019 season, leaving big shoes to fill on the court.

Despite two significant holes in the team’s lineup, Seattle finished the season with a respectable 18-16 record. As the playoffs’ sixth seed, the Storm defeated the Minnesota Lynx in the first round but were then defeated by the Los Angeles Sparks in round two.

Several players had impressive performances for Seattle in 2019, such as Natasha Howard winning Defensive Player of the Year. Respectively, Jordin Canada and Alysha Clark received All-Defensive First and Second Team honours, while Jewell Loyd was an All-Star for a second consecutive season.

With the return of Stewart and Bird in 2020, the Storm are unquestionable contenders for the WNBA championship. Unlike most other teams around the league, Seattle’s lineup features both star power and depth. Assuming there isn’t a considerable number of players who opt out due to COVID-19, the Storm should be heavily favoured by most.

As for new additions, the Storm’s 2019 first-round pick Ezi Magbegor will make her WNBA debut. The New Zealand-born Australian won her second WNBL Youth Player of the Year award last season. Seattle also added Epiphanny Prince and Morgan Tuck—a former teammate of Stewart at the University of Connecticut—during the off-season.

One confirmed absence due to COVID-19 is head coach Dan Hughes, who’s at a higher risk if he contracts the virus following his recent battle with cancer. Just like last season, assistant coach Gary Kloppenburg will take on Hughes’ role for the time being. Kloppenburg’s assistant coaching career with the Storm dates back to the early 2000s.

In response to increased awareness of social injustice in the United States, the WNBA and WNBPA launched the Social Justice Council. It will serve a crucial role this season and going forward by creating a platform—The Justice Movement—to continue discussions about race, LGBTQ+ advocacy, gun control and other social issues.

Stewart will serve on the Social Justice Council, with the WNBA dedicating its opening weekend to Black Lives Matter. From Jul. 25 to Sept. 11, the WNBA’s season will take place at IMG Academy in Bradenton, Flda. Seattle begins its season on opening day at noon ET against 2020 first-overall pick Sabrina Ionescu and the New York Liberty.

Throughout a 22-game schedule, more than half of Seattle’s games will receive national audiences on ESPN, ABC and CBS Sports. With Stewart and Bird returning—along with a terrific supporting cast—the Storm will be must-watch television this summer.