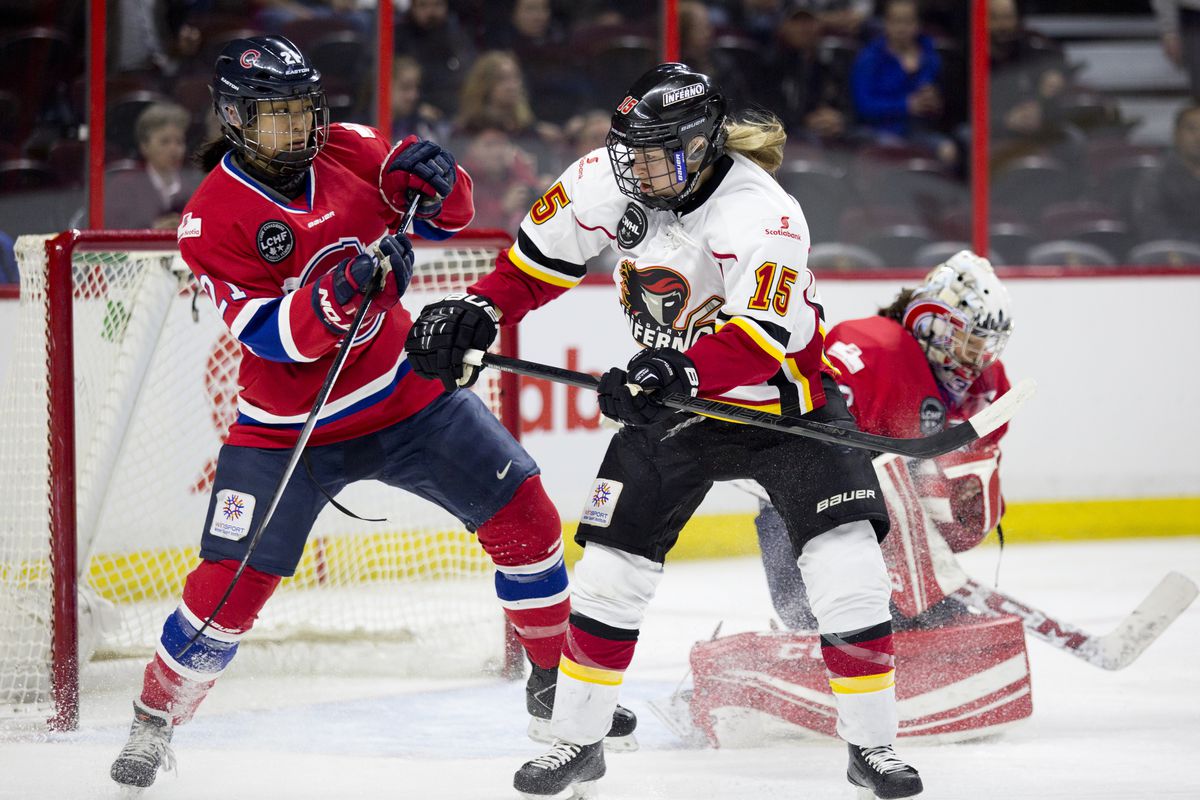 Heading into this past weekend, the Calgary Inferno and Les Canadiennes de Montréal each had seven wins in the first eight games of the season. The only loss for both teams came against one another in the season-opening weekend, splitting a pair of games at Place Bell. After their most recent matchups in Calgary, the Inferno came out on top in both games.

As a result, the Inferno improved to 9-1 on the season and Les Canadiennes now hold a 7-3 record through 10 games. Calgary leapfrogged the Shenzhen KRS Vanke Rays for top spot in the CWHL standings, while Les Canadiennes remained third place in the league. Despite trailing second-placed Shenzhen by one point, Montréal has three games in hand.

On Saturday, the Inferno jumped out to a 3-0 lead in the first period with goals from Kaitlin Willoughby, Rebecca Johnston and Brigette Lacquette. In the middle frame, Les Canadiennes battled back and made it 3-2 before the 10-minute mark of the period on goals from Mélodie Daoust and Ann-Sophie Bettez. Just 44 seconds into the final period, Johnston scored her second of the game and secured a 4-2 victory for Calgary.

Sunday’s matchup saw Les Canadiennes get off to a better start as Bettez and Marie-Philip Poulin each had one goal and were ahead 2-0 at the first intermission. However, the Inferno came storming back in the second period with goals from Halli Krzyzaniak and Zoe Hickel, knotting the game 2-2 going into the third period. The game looked to be bound for overtime, but Blayre Turnbull’s tiebreaker with 26 seconds left was enough for Calgary to snatch a 3-2 win.

Over the course of the weekend, the Inferno outshot Les Canadiennes by a total of 63-41. While both games were fairly close, Calgary appeared to control the play and this reflected in the shots on goal. Inferno goaltender Alex Rigsby wasn’t very busy, but shut down Montréal’s high-powered offence when needed. Les Canadiennes goaltender Emerance Maschmeyer had a big workload and was awarded Sunday’s third star for her efforts.

These losses for Montréal come shortly after the unexpected resignation of head coach Dany Brunet. Assistant coach and former player Caroline Ouellette took over Brunet’s position for their games against the Inferno, with general manager Meg Hewings set to name an interim head coach in the near future. All things considered, Les Canadiennes were understandably less prepared than usual following the team’s announcement on Saturday.

Nevertheless, these are two super teams and absolute contenders for the 2019 Clarkson Cup. They conclude their season series on Feb. 2nd and 3rd in Montréal, when Les Canadiennes will have presumably figured out their coaching situation. That weekend should be a more accurate indicator of how these teams stack up against each other, which could also very well be a preview of the Clarkson Cup Final.