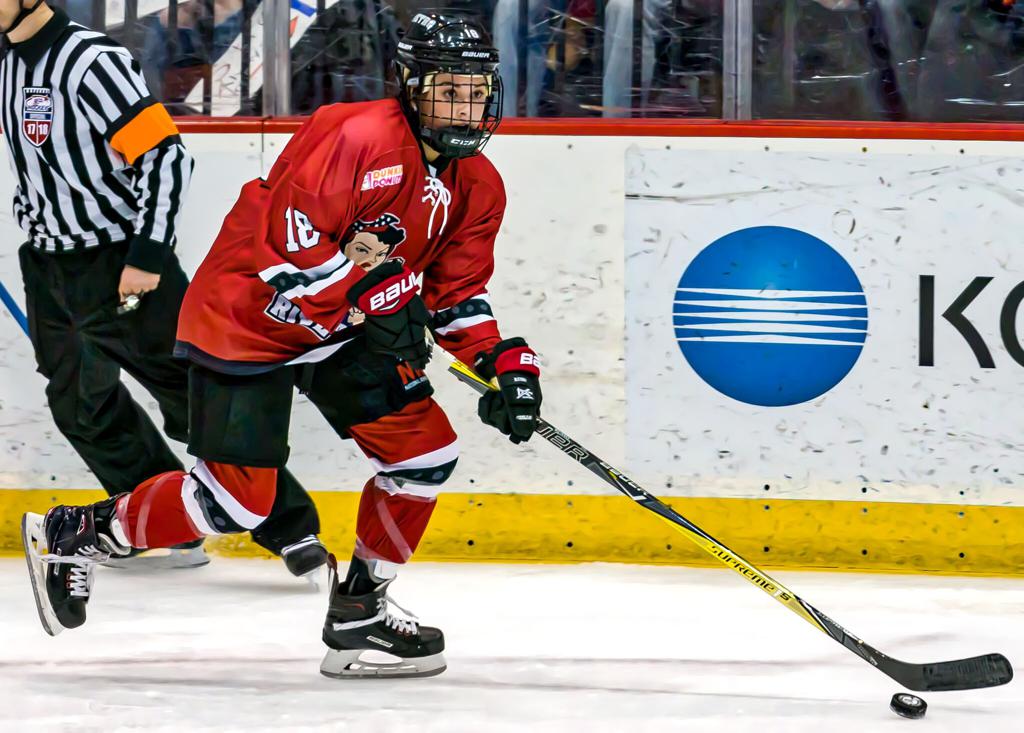 Rebecca Russo of the Metropolitan Riveters. Photo courtesy of NWHL.

As the defending Isobel Cup champions, there were high expectations for the Metropolitan Riveters this season. However, the team got off to a 0-5 start and dug themselves a deep hole. With a 2-8 record heading into the NWHL’s holiday break, the Riveters should be looking forward to a fresh start in the New Year.

In the Riveters’ most recent action on Sunday, they suffered a 5-2 loss on home ice against the Boston Pride. Their only two wins this season came on Oct. 27th and Nov. 25th, which were a 3-2 win over the Pride and a 4-3 victory against the Connecticut Whale, respectively. Aside from that, it really hasn’t gone their way this season.

Much of the team’s struggles could be a result of below average goaltending, with uncharacteristic stats next to Katie Fitzgerald’s name. In her sophomore season with the Riveters in 2017-18, Fitzgerald boasted a 0.920 save percentage. She was also lights out in the playoffs, posting two shutouts en route to an Isobel Cup championship.

Now playing in her third season in the NWHL, Fitzgerald holds a record of 1-7 and her save percentage has fallen to 0.861 in 2018-19. Backup goaltender Kimberly Sass earned a win in her first start of the season on Nov. 25th against the Whale, but then allowed four goals in the team’s most recent loss to the Pride on Dec. 9th.

Despite subpar performances from their goaltenders, the team in front of Fitzgerald and Sass hasn’t given them much help. On average, the Riveters are allowing 27.9 shots on goal per game, but it isn’t simply about the quantity. As a team, the Riveters are prone to defensive zone mistakes and give up high quality scoring chances too often.

The Riveters have also found it difficult to put the puck in the net, both at five-on-five and on the power play. They’re averaging less than two goals per game, while the power play is only converting on 5.4% of its opportunities. Rookie forward Audra Richards leads the way with six goals, followed by Madison Packer’s four goals on the season. Amanda Kessel currently has seven assists and eight points, whereas Rebecca Russo has collected five points this season.

It’s fair to say that injuries have been a major factor, with forward Miye D’Oench missing the opening six games and defender Courtney Burke’s absence for four games to begin the season.

Along with the injury bug, another likely reason for the Riveters’ surprising position in the standings is their coaching change. The hiring of Randy Velischek came just a little over two weeks before their season opener, an indicator of their lack of preparation. This transition between coaches has shown in their play on the ice and the results.

Not one single person is to blame for the Riveters’ struggles this season, as there have been a number of factors off the ice that led to this point. It has been an accumulation of various problems and it’s ultimately an issue that can only be fixed through a collective effort. The Riveters return to the ice on Jan. 6th when they face off against the Whale.