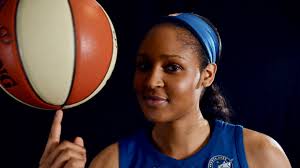 Maya Moore is a WNBA star on the Minnesota Lynx. As Sports Illustrated’s 2017 Performer of the Year and a top-10 scorer in NCAA D1, Moore makes about $45,000 a year with the Lynx. (Photo courtesy of Pioneer Press.)

April 24 marked the 22nd anniversary of the approval to form the WNBA. Over the past 22 seasons, the league has grown significantly and created more respect for female basketball players across North America.

The WNBA is a great example of how to grow a professional women’s sports league. They originally started with just eight teams, but have now expanded to 12.

Not only have they been able to provide more opportunities for players, but they have also grown in viewer popularity. TV deals with large companies including ABC and ESPN have helped make women’s basketball a mainstream sport in North America. In fact, the signing of their eight-year TV deal with ESPN in 2007 was the first of its kind for a professional women’s sports league.

From dynasties like the Houston Comets and Minnesota Lynx, the league has also produced many all-stars including names like Lisa Leslie, Swin Cash, and Maya Moore.

The issue of equal pay is still prevalent, as NBA stars are making millions while WNBA stars are not. The minimum rookie salary is just above $30,000, meaning these athletes are making at least a minimum living wage. This has been brought to the spotlight with star Breanna Stewart injuring herself overseas – an issue that would not exist if these women didn’t have to supplement their earnings in a separate league.

Perhaps the upcoming 23rd season will bring more positive change to the world of women’s basketball. The March Madness tournament received more attention this year than it had in the past, and with new stars coming in, like Jackie Young and Asia Durr, the league is only getting better.

The next season is less than a month away, with the first tip-off taking place on May 24th.