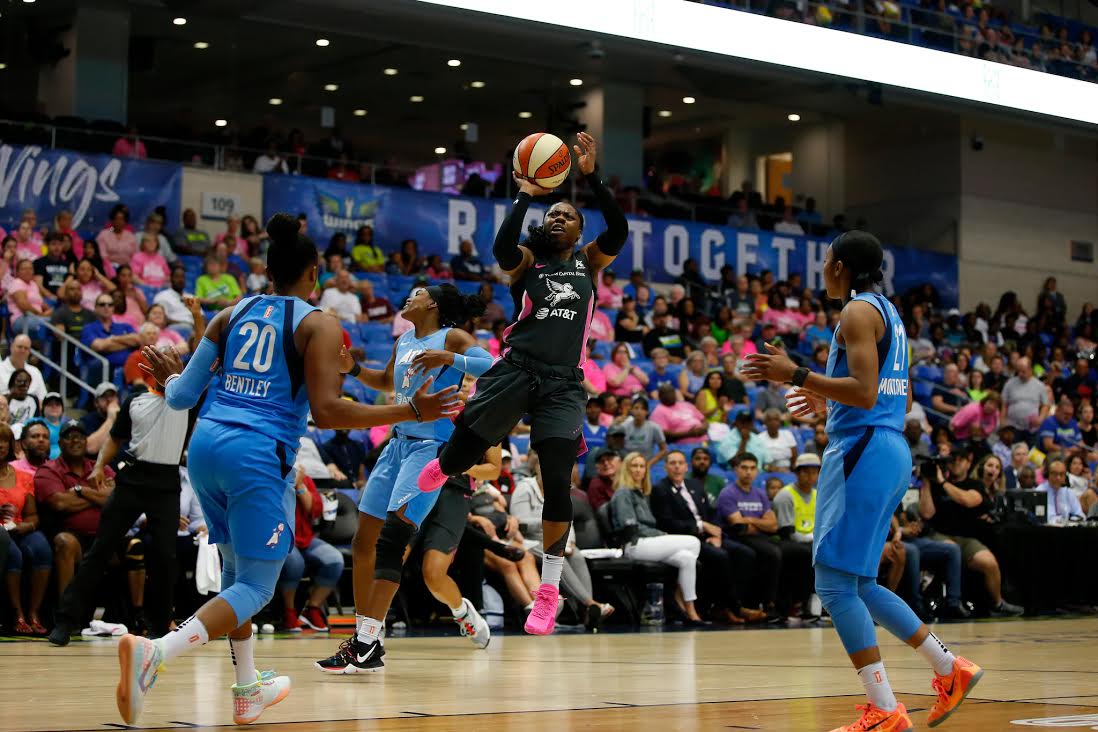 One week remains in the regular season and although all eight playoff spots are secured there is still so much in the air. Connecticut and Washington are battling for the top seed and home court throughout the playoffs. Las Vegas, Los Angeles and Chicago are fighting for a bye to the second round. Meanwhile Phoenix, Seattle and Minnesota are battling to avoid the eighth seed and aiming for home court advantage in the first round. At the bottom of the standings, New York and Indiana are “competing” for the best odds in the 2020 draft lottery.

Rankings are based on recent results above all else.

1) Washington Mystics (23-8): The Mystics have lost only two of their last 16 games. One involved career performances from Yvonne Turner and Brittney Griner. Their only other loss was to the Sky two weeks ago in a game in which Kristi Toliver was out for Washington. Although Toliver’s return is uncertain, the Mystics have still been a great team without her.

2) Connecticut Sun (22-9): Take out a five-game losing streak that spread across the end of June and the start of July and you would easily have the league’s best team. Jonquel Jones’ scoring has cooled off considerably, failing to score above 16 in her last 11 games. The depth of Connecticut has shown through with a mix of Alyssa Thomas, Jasmine Thomas, and Courtney Williams all stepping up at times.

3) Las Vegas Aces (20-12): With A’Ja Wilson back and returning to form, the Aces are starting to look dangerous again. A three-game losing streak was snapped with a much-needed win over the Sparks that evened the season series between the two. With 2017 top overall pick Kelsey Plum coming off the bench the last two games, averaging 18.5 points with 5.5 assists and no turnovers, the Aces could use some time to both rest and work on chemistry.

4) Los Angeles Sparks (19-12): Health plays such a crucial role in sports when it comes to determining who will be the champion. Right now Los Angeles should feel good about themselves: all 12 on the roster are rested and ready to play if called upon. Only Chelsea Gray was able to start all 31 games, and Gray and Tierra Ruffin-Pratt were the only players to play in all 31.

5) Chicago Sky (19-13): Everybody knows the All-Star trio of Courtney Vandersloot, Allie Quigley, and Diamond DeShields as playmaker, sharp shooter and athletic defender, respectively. The real secret weapon for the Sky’s success lies in the play of Stefanie Dolson and Jantel Lavender/Astou Ndour. Ndour has taken over the last nine games in the starting line-up due to Lavender having foot surgery. She has put up six double digit scoring games and four games with at least nine rebounds.

6) Phoenix Mercury (15-16): The Mercury have not gone on a winning or losing streak of more than three games at any point this season. They have collected two wins over Washington, while at the same time losing two games against Dallas and one to New York. Diana Taurasi has only recently started playing and the veteran could give them a boost to make them an underdog against the top few teams.

7) Minnesota Lynx (17-15): Sylvia Fowles has been consistent, although not as good as years past. Odyssey Sims has been everything Minnesota hoped for when they acquired her from the Sparks in exchange for Alexis Jones. Sims is setting a career high with 5.3 assists per game. Meanwhile rookie Napheesa Collier has outperformed expectations throughout the year, especially as of late.

8) Seattle Storm (16-15): Without their two best players the defending champs are slowing down. They’ve lost seven of 11 with their only win over a playoff team being an eight-point win over the Lynx. Natasha Howard has slowed down over the last 11 but is the only player capable of putting up numbers over that span. Jewell Loyd has dropped down to 9.4 points per game over her last 11 and appears to be the most affected with defences no longer focused on reigning MVP Breanna Stewart.

9) Indiana Fever (11-21): Going exactly one month with a single win is what cost the Fever a chance at making the playoffs. They lost 11 of 12 over the last four weeks. A positive for the Fever has been the phenomenal play of Teaira McCowan. McCowan has put up 10 double-doubles this season and at least 20 points and 10 rebounds in three of her last four games. She has the second-highest individual total this season for any player. Once you factor in the return of Victoria Vivians, who had a torn ACL, the Fever should be able to return to the playoffs.

10) Dallas Wings (10-21): Behind a rising star, the Wings have managed to improve enough that they are a threat to some of the top teams in the league. The rise of Ogunbowale, along with the play of third year players Isabelle Harrison and Allisha Gray and fourth year forward Kayla Thornton, the Wings have taken great strides. With Azura Stevens expected back from a foot injury and Skylar Diggins-Smith back from giving birth, look for them to rise in 2020.

11) New York Liberty (9-22): Without any consistency outside of Tina Charles the Liberty continue to be stuck near the bottom of the league. Kia Nurse has come closest to reaching a high level, but a rough stretch where she scored more than 11 only twice in nine games revealed the trouble she still has. Meanwhile last year’s first round pick Asia Durr has only scored more than 12 twice, while failing to exceed either four assists or rebounds in any games.

12) Atlanta Dream (7-24): With an offensive rating just hitting 90, it’s clear why the Dream have struggled. The struggles extend up and down the roster with only one player having a positive net rating: Alaina Coates has a rating of 5.4 but has only played 69 minutes — the second fewest on the team.

A starting line-up with one bench player who were the best over the last six days. Amount of games has an impact

G: Arike Ogunbowale (Dallas Wings): Three 30-point games, a rookie record nine consecutive games with at least 20 points… safe to say she can score in this league. After a rough three-game stretch in which she shot 12-50, Ogunbowale has connected on over 40 per cent in all but two games. She has even reached six assists in three games after only doing so once before.

G: Courtney Vandersloot (Chicago Sky): Nobody dishes out assists like the new single-season record holder, after breaking the mark she set last season with a few games to spare. Vandersloot has averaged more than four assists per game more than her closest challenger over the last month. Once you realize she only averages 2.2 turnovers per game and is responsible for 46.3 per cent of the Sky’s assists, leading the league, the full impact of her game reveals itself.

F: Elena Delle Donne (Washington Mystics): Usually the best player on the best team is an MVP candidate and although the Mystics play a perfectly balanced team game it still all starts and ends with the presence of Delle Donne. The forward acts as both a scorer and facilitator while contributing on defence. With Delle Donne back the Mystics have returned to being the top team. They haven’t won a game without her this season, and are looking ready to avenge their loss in last year’s finals.

F: Napheesa Collier (Minnesota Lynx): Another rookie making this list. The main difference is Collier is more of an all-around player. The Lynx rookie is top 20 in points and rebounds while also ranking just outside the top 20 in assists and blocks over the last month. She is also shining on defence where she is averaging two steals per game, which has been fourth best in the league over the last month.

C: Brittney Griner (Phoenix Mercury): She may have been suspended for three games at the beginning of August but the performance she put up in seven games puts her on this list. Griner has in seven games scored at least 21 in six while shooting at least 45.8 per cent; had at least five rebounds per game including 14 against New York; as well as an average two blocks per game.

Bench: Dearica Hamby (Las Vegas Aces): She may have started four games due to a Wilson injury but over the last month she has come off the bench six times and done her typical work. Hamby continues to average nearly a double-double. Hamby has averaged 10.7 points and 8.2 rebounds per contest along with assists to turnover ratio above two.

A few games worth tuning into over the next six days. All times are eastern standard time.

Seattle @ Phoenix, Tuesday 10:00 ESPN2: The first chance for the Mercury to prepare for hosting a potential first round match-up this week when Seattle comes to town. The winner of this game holds the tiebreaker.

Minnesota @ Phoenix, Friday 10:00 League Pass: Another potential playoff preview and a must-win game for both, Phoenix has to be slightly more concerned as the Lynx have the tiebreaker secured already.Indiana @ New York, Friday 7:00 League Pass: Currently separated by a game and a half, this game could decide who ends up with higher odds in the draft lottery. Fever lead the season series 2-1.