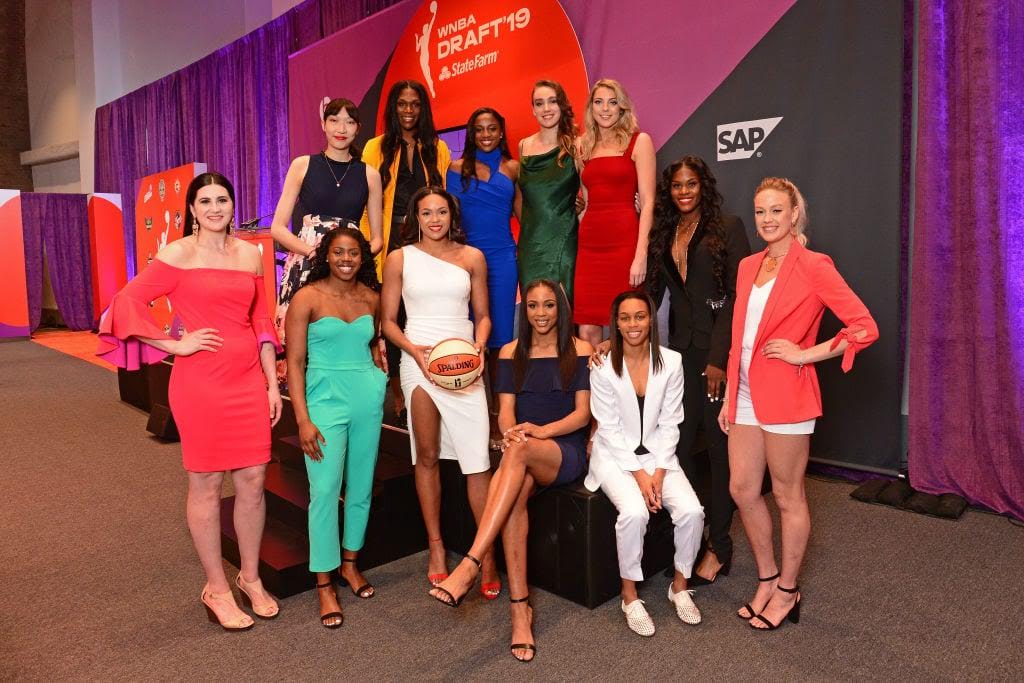 Players from the 2019 draft. (Photo courtesy of WNBA.com.)

It’s never too early to make snap judgements on players who have just started their careers, especially in a league in which the talent level is drastically higher than their previous experience. It’s time to look back at the 2019 draft and see how each team is looking based on their selections. Just a quick note: I included any “rookies” who were eligible for past drafts but are playing their first games this season.

Based on recent results above all else; also a quick way to laugh at me when a lower ranked team beats a higher ranked one

A bit of an odd situation in Washington where they have three rookies but only one was drafted in the 2019 draft, and Leslie is the only one who has yet to play. Leslie is out injured and not expected to return until late in the season but with the talent the Mystics have, they can afford to miss their first-round pick.

Peddy was drafted by Indiana but didn’t make it out of training camp. She has spent time in Europe since then and has only played sporadically this season. Meanwhile Mestdagh had a relationship with Emma Meesseman, from their time on the Belgian national team, and is there for EuroBasket, but rarely played before leaving. Also, the Mystics traded their second-round pick to Dallas as part of the deal for Aerial Powers.

Connecticut knew they needed a bit of defensive help coming into the season. They picked the reigning defensive player of the year who averaged more rebounds than anyone else in the NCAA last season. Anigwe hasn’t had to overextend herself to much this season as she has played minimal moments and been a negative in every game in terms of net rating.

Their other rookie has played even more sparingly after being picked in the second round. Carleton was the Big12 player of the year but has struggled finding her shot in the four games she has played. She has yet to register a point, after averaging just under 22 while at Iowa State last season.

Las Vegas won the lottery yet again last season — only the third year in a row — and added another dynamic guard in Jackie Young of Notre Dame. After trading their second-round pick, they actually had two different picks that they traded away. They needed maximum value and got it from the lottery balls.

Young has done her part to get the ball to her teammates with a rookie-high 4.3 assists per game, with only 1.5 turnovers to show her early maturity. Young is only averaging 5.7 points per game though but has started every game for the Aces, so there is no concern for them with her handling the ball.

Just when you thought Seattle was having a rough season for injuries and could rely on a young player, you realize their first-round pick is staying in Australia until next year — not good. Ezi Magbegor may not be able to help but it looked as If they may be able to get something out of second-round pick Anriel Howard before they waived her to make room for veteran Blake Dietrick due to all their injuries. For 2019 the Storm are writing off any rookie production in search of a title.

Both of these picks have managed to play in a lot of games without playing a lot of minutes. Injuries have broken down the Sparks roster throughout the season between Candice Parker, Alana Beard, Chiney and Nneka Ogwumike, as well as Maria Vadeeva playing only one game before EuroBasket.

Both Brown and Mabrey are averaging 15 minutes and five points a game. The difference becomes apparent with Brown collecting more boards while Mabrey is a bit more of a playmaker for Los Angeles. Both players are capable of being role players that could come off the bench and swing a game or two in the playoffs.

On the positive, Samuelson is expected to return from a hand injury soon, but currently she has only managed to play in three games this season. Samuelson never seemed to have the trust of the coaching staff, although the injury could have been playing a role, and with the Sky slowing down after a great start they could use the support. As for Jackson she has hardly seen the court with only four games played and has not been asked to do much for the Sky.

The Lynx have been getting more contributions than expected from Collier, who was expected to be talented. But with the roster the Lynx have built this year Collier has had lots of room to grow into early in her career. Collier made a HUGE impact in her debut, shooting 8-10 on her way to 27 points. Only Candice Parker has scored more in a debut, and put up solid numbers in a few other games to help carry the Lynx.

Shepard unfortunately is done for the year after tearing her ACL. Shepard had been putting up decent numbers in the six games she did play but will be missing for the rest of the year. For a team that hasn’t lost a game by more than seven points I’m sure the Lynx would take any and all contributions.

The Mercury were able to acquire Turner from Atlanta in exchange for their first-round pick from last year: Marie Gulich. For the oldest team in the league, Phoenix has managed to get more contributions out of Smith and Cunningham who have had a few solid performances each. Cunningham has played at least 12 in the last three games, all wins, and was able to put up 19 points in a win over Indiana. Smith has been okay with a net rating just barely in the negatives although she has struggled shooting, 19 per cent overall and only 17 per cent from three, but she has made up for it with a few games where she has collected a couple of rebounds.

For a team that was looking to increase its defence and add some size the addition of the shot blocking, McCowan was not a surprise. The surprise was how little she played early in the season. Having played between 21 and 30 minutes over the last six games, McCowan has earned her way into the starting line-up.

Burke has been on an opposite path having had her best games early in the season while having a more limited role lately. If Burke can get her game going again the Fever could have quite the young core forming. Other than a 10-point performance in 14 minutes of action against the Liberty in early June, Kea has hardly seen the court.

Asia Durr has been as good as advertised, averaging 12 per game on 48 per cent shooting overall, and 34 per cent from three-point range. Durr has been relied on as she averages over 30 minutes per game, second behind Collier, and has scored in double digits in six of her last seven games. Xu made history as the first player taken from the NBA International Draft Academy and the Chinese prospect has made a small impact, but the Liberty appear to be taking their time with her development as she is also only 19. As for Johannes, she has yet to appear in a game this season but after playing with Bria Hartley in France she should have some comfort when returning from EuroBasket.

This is definitely the most interesting class in the league with a star in Ogunbowale. Gustafson was one of the top stars in college last year but has already been put on waivers and reclaimed by Dallas. Meanwhile McCarthy-Williams was a preseason cut by the Sparks last season. Ogunbowale is capable of putting up more points than any other rookie — 13 per game — but also has struggled mightily at times, such as her 2-23 shooting performance Friday against New York.

The only team not to have their first-round pick from this year’s draft also needs it more than any other team. Nothing against Hiedeman or Carzola, but Carzola is the only one to play and has hardly made an impact when she does. The next draft will be important if Atlanta wants to start planning for their future once Angel McCoughtry retires or moves on to another team.

A starting line-up with one bench player who were the best over the last six days; amount of games has an impact

G: Odyssey Sims (Minnesota Lynx): Twenty-three points and eight assists was her bad game this week. Sims did a little bit of everything in her other game against Indiana with 25 points, seven assists, seven rebounds and five steals. She was also perfect from the free throw line, going 8-8.

G: Chelsea Gray (Los Angeles Sparks): I like to imagine Grey did this to show the Sparks that losing Sims wasn’t all terrible. In a pair of wins she put-up double-digit points, including 18 against Chicago, along with 11 assists and only three turnovers.

F: Elena Delle Donne (Washington Mystics): In only my second season watching the WNBA I’m already becoming numb to Delle Donne scoring 20-25 while shooting above 50 per cent and collecting 8-10 rebounds. Don’t be me and respect the greatness of this versatile forward.

F: A’ja Wilson (Las Vegas Aces): Sure, it may have taken an extra five minutes of overtime, but don’t let that overshadow a career-high 39 points from Wilson to get the win against Indiana. She shot 14-20 and 11-14 from the free throw line to go along with 11 rebounds it the definitive performance of the week.

C: Brittney Griner (Phoenix Mercury): She didn’t pick up as many rebounds as you would expect but with 23 and 20 points in two games this week Griner did her part to help Phoenix build a three game winning streak as they prepare for the return of Diana Taurasi.

Bench: Dearica Hamby (Las Vegas Aces): Hamby continues to play at an all-star level coming off the bench for over 20 minutes a game. Consecutive double-doubles sealed the deal for the versatile big who is arguably the breakout star of the year.

A few games worth checking on over the next six days; all times are Eastern Standard Time.

Washington @ Los Angeles, Sunday 5:00 League pass: These two met two weeks ago in Candace Parker’s debut. She started 5-28 in her first three games but is 11-22 the last two, so expect this game to be closer than the last one, which the Mystics won by 29.

Indiana @ Dallas, Friday 8:00 CBSSN: Indiana is only 2-6 after starting 3-1 and has lost four in a row as they look to equal their win total of six from last year. Also watching Ogunbowale is always worth it whether it goes good or bad.