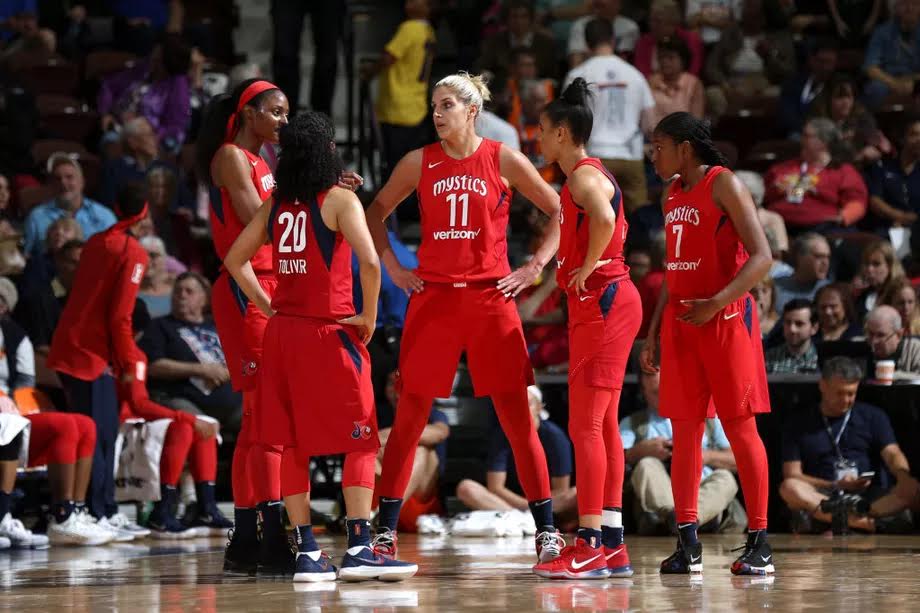 Instead of me making up the rankings as I go, this week the ranking will be based on net ratings. The WNBA expanded their stats section over the winter and added many more ways to learn about your favourite team’s strengths and weaknesses. Now we have more numbers to use in arguments and critique of players, coaches and GMs, and I’m sure they’re all so happy about that.

POWER RANKINGS
Based on recent results above all else; also a quick way to laugh at me when a lower ranked team beats a higher ranked one
1) Washington Mystics (7-3) [Net Rating: 14.4 (1), Off Rating: 108.7 (1), Def Rating: 94.3 (4)]
By far the best team in the league, according to the advanced stats, is the nation’s capital. Returning more players than any other team definitely helps. On offence they are the best shooting team in the league while also carrying second highest AST% at 67.6 per cent.

2) Las Vegas Aces (5-4) [Net Rating: 7.1 (2), Off Rating: 98.3 (4), Def Rating: 91.2 (1)]
After a slow start the Aces are slowly turning their season around, with Wilson and Cambage building chemistry while Hamby continues to cause damage off the bench. Consistency has been the main problem for the Aces who have yet to win, or lose, more than two games in a row. Although the Aces have the top defence in the league, things could be better since they have struggled at times against both good (Washington) and bad (Phoenix) offences.

3) Connecticut Sun (9-2) [Net Rating: 7.0 (3), Off Rating: 100.6 (3), Def Rating: 93.5 (2)]
Another team that is near the top, thanks to their defence, is a little more surprising with Connecticut boasting the second-best defensive rating even though they are known more for their offensive playmaking. Grabbing loose balls after missed shots at a league-best rate while having the second-best assist/turnover ratio are easy ways to generate extra chances.

4) Seattle Storm (7-4) [Net Rating: 2.9 (4), Off Rating: 97.1 (6), Def Rating: 94.1(3)]
Well look at that: another top team that relies more on defence than offence… Starting to notice a trend? Without the reigning MVP and their point guard from last season, the Storm have had to adjust their style this year. The offence has dropped from second best and over 100 points, but their defence has tightened up and is allowing five points less per 100 possessions. Although opponents are hitting shots effectively, second worst EFG% against, the Storm aren’t allowing free buckets and causing turnovers.

5) Minnesota Lynx (5-5) [Net Rating: 1.8 (5), Off Rating: 96.8 (7), Def Rating: 95.1 (5)]
The Lynx relying on defence is nothing new, it’s simply the players they are using now due to all their roster turnover. A young team that deserves credit for focusing on that end, but after a strong start they started to fall apart during their losing streak as they lost five of six. After starting the season with three straight wins, the defence began to collapse under the weight of all their turnovers. Other than a hot shooting night from themselves or their opponent going cold the Lynx seem likely to continue losing for now.

6) Chicago Sky (6-3) [Net Rating: 1.0 (6), Off Rating: 98.2 (5), Def Rating: 97.3 (7)]
After being a tire fire in their own half last year their defence has become average. After allowing opponents to shoot them out of building either on their first, second or third, the Sky have cleaned that up to limit opponents to the fourth lowest OREB% in the league. The offence surprisingly appears to come to live without Diamond DeShields on the court as it scores over nine points more per 100 possessions. If she can improve this team could continue to pull off surprises.

7) Indiana Fever (5-5) [Net Rating: 0.5 (7), Off Rating: 101.3 (2), Def Rating: 100.8 (10)]
This is a team that is just scraping by in net ratings with a few positive results. Indiana has been better on defence this year but in three separate performances has been destroyed by Seattle, Phoenix and Atlanta. A bad set of ingredients has led to their poor defence. They are last in opponents turnover percentage at 15.5 and allow the second highest amount of offensive rebounds by allowing just over 35 per cent of opponents misses to be collected.

8) Phoenix Mercury (3-5) Net Rating: -4.8 (8), Off Rating 95.9 (9), Def Rating: 100.7 (9)]
A lot of this is just white noise with Diana Taurasi about to return to the lineup, which should help relieve a lot of the pressure off her fellow stars in Bonner and Griner while her playmaking should improve the chances her teammates see. They’ve done a good job limiting opponents to only 19 three attempts per game, which is third best in the league but they’re also the only team allowing opponents to shoot over 40 per cent from deep. Hopefully Taurasi can help prevent with her relentless energy, even coming off a back injury.

9) Dallas Wings (2-6) [Net Rating: -7.2 (9), Off Rating: 89.5 (12), Def Rating: 96.7(6)]
Yikes. Not much to look at for this offence after losing their two most dynamic players. On the positive though, Skylar Diggins-Smith should return at some point this season. Until that happens, the most inexperienced team in the league is going to go through a hard lesson in how to create offence for yourself and others as a pro. They won two in a row to snap a five-game losing streak to start the season but in those two games they put up a combined 0.68 assist-turnover ratio. That is not going to work for long, as evidenced by an 18-point loss to Las Vegas in their last game. Until they score more than 72 in a game the Wings offence is one to ignore.

10) New York Liberty (3-7) [Net Rating: -7.3 (T-10), Off Rating: 96.5 (8), Def Rating: 103.8 (12)]
I decided to put New York higher for the simple fact that at least when you watch them you know it’s going to be a fun game. They play no defence. The best thing you can say about New York is that the worst part about their defence is they allow opponents to score efficiently — highest Opp EFG%, and easily with the highest Opp FTA rate. Kia Nurse helps on both offence and defence with the Liberty improving by 6.8 on offence and 8.6 on defence when she’s on the court. If the second-year guard can continue to improve she could be a future star in the Big Apple to replace Tina Charles.

11) Los Angeles Sparks (4-6) [Net Rating: -7.3 (T-10), Off Rating: 92.1 (10), Def Rating: 99.4 (8)]
This is starting to get a little uncomfortable for new coach Derek Fisher. The Sparks slowly fell apart last year but with Chiney Ogwumike coming in and Chelsea Gray looking ready for a breakout they were supposed to be much better than this. The offence went from bad to worse with Candace Parker making her return three games ago, dropping 17 points in offensive rating down to 77 when she plays. Unless Fisher can find a way to rotate the Ogwumike sisters and get Candace Parker going, this is going to be a long year and a failed experiment.

12) Atlanta Dream (2-7) [Net Rating: -12.2 (12), Off Rating: 91.2 (11), Def Rating: 103.4 (11)]
This year was always going to be a bit of a write off, sorry Dream fans, but the defence probably shouldn’t have fallen apart as much without Angel McCoughtry. From a top defence down to 11th shows how important of a role she was playing in guiding everyone to the right spots on the floor even has a wing player. Atlanta will be looking for players throughout the year who can help on both sides of the ball as McCoughtry alone can’t be relied on to fix all their problems.

TEAM OF THE WEEK
A starting line-up with one bench player who were the best over the last six days; amount of games has an impact
G: Erica Wheeler (Indiana Fever)- After starting the season strong Wheeler has truly broken out this week with 28 points, thanks in part to shooting six for eight from deep. A win over the Sky may have given her some false confidence as she shot 2-7 in her next game. Wheeler has also helped her teammates by putting up eight and four assists in those two games.

G: Jewell Loyd (Seattle Storm)- Loyd has been a little behind the pace she was on last year, which has to be concerning for the Storm who are short handed this year. In two games throughout this week it looks like Loyd has found her groove in the offence again, putting up her two best point totals with 23 and 21 while shooting above 40 per cent both times.

F: Elena Delle Donne (Washington Mystics)- There’s a reason she’s a former MVP. Against the Sparks she wasn’t needed for scoring so she grabbed 15 boards. In the final two games of the week she put up 29 and 21 points respectively while shooting a combined 20-34, including 7-14 from three-point range, while also putting up double digit rebound totals in both games.

F: Kayla Thornton (Dallas Wings)- With the Wings struggling to get going on offence somebody had to step up. In came Thornton in an 18-point, 11-rebound performance while playing 37 minutes that helped propel the Wings to their second win of the season.

C: Sylvia Fowles (Minnesota Lynx)- I don’t like giving these spots to players who only played one game but Fowles came up big against New York as the Lynx snapped a four-game losing streak. Nineteen points on 8-13 shooting, four offensive rebounds to help her get 10 total for a double-double, along with three assists, three steals and four blocks rounded off her all-around star performance.

Bench: Tianna Hawkins (Washington Mystics)- A consistent bench can be the difference between winning and losing and Hawkins has done her part to help the Mystics win three straight to start their four-game road trip. Putting up 15 against the Aces against another bench star in Dearica Hamby, who was only able to put up six points, sealed it for Hawkins. She put up at least 10 points and four rebounds in every game this week.

WEEK AHEAD
A few games worth checking on over the next six days. All times are eastern standard time.
Connecticut @ Washington, Saturday 2:00 ESPN: The top two teams in the league meet for a third time already this season. Both teams play at a high pace with beautiful ball movement on offence, so sit down and enjoy basketball at its finest.

Indiana @ Phoenix, Friday 10:00 CBSSN: The long-awaited return of Taurasi is expected to happen for this game after being doubtful for Sunday’s game.

Chicago @ Seattle, Friday 10:00 NBA TV: Two teams that shouldn’t be this good for different reasons (injuries in Seattle and youth in Chicago) have looked strong to start the season and will hope to continue their strong start and show it wasn’t a fluke.