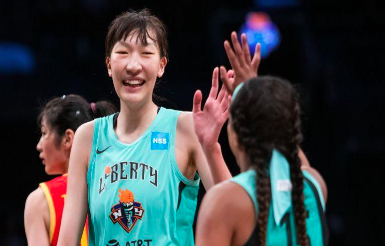 Han Xu, a WNBA rookie, was drafted to the New York Liberty as the 14th overall pick. Playing in a city with a large market grants her the opportunity to put Chinese basketball on the map.

The center towers over her competition at six-foot-nine. Having learned to extend her shooting range to 15 feet, her offensive skill set gains a valuable layer.

The 19-year old takes on the pressure of being a basketball representative of her country, alongside figuring out her place in the WNBA. Yet, Xu faces the challenge wholeheartedly. Her on-court success will be the next step of being an influencer and getting more talent from China to join the WNBA.

“I feel some pressure,” Xu told The New York Times. “I represent the whole of China.”

These expectations have not seemed to bother her on-court performance. In the preseason opener, The New York Liberty faced off against the Chinese national team. Playing against her former team must have lit a fire inside of her, as she finished the game with 19 points, five rebounds and three assists while shooting six to eight from the field and seven to eight at the free throw line.

“Physically and mentally, she’s so talented,” Li Meng, a forward on the Chinese team, told The New York Times. “She can be the best player in the world.”

Securing the 89-71 point win against China, Xu proceeds to waste no time using her platform to uplift her home country.

“I wish to have stability and learn what I can learn from my experience here and hopefully bring some back with me to China and as for the younger people,” she said. “I hope I can be an inspiring player to them and motivate people to come out and watch the games and really bring some attention to women’s basketball.”

With a few more preseason games to go, the Liberty coaching staff is hopeful for Xu to continue her development and to secure a starting spot to begin the regular season.