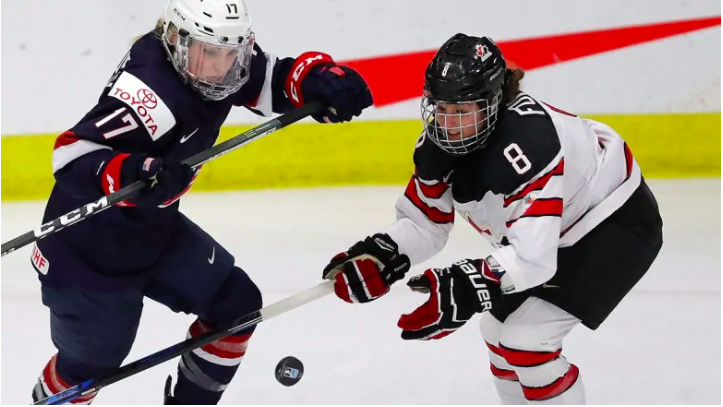 Canada defeated the USA in the women’s 3-on-3 game on Friday at the NHL All-Star Weekend. (Carlos Osorio/Associated Press)

ST. LOUIS, Mo. (Jan. 24, 2020) — Following Kendall Coyne Schofield’s success with the NHL All-Stars last year, active and supporting members of the Professional Women’s Hockey Players Association (PWHPA) were invited to compete in the 2020 NHL All-Star Skills. The Canadians won the first-ever Elite Women’s 3-on-3 showdown between the American All-Stars and Canadian All-Stars, featuring 10 players on each team. A pair of Hockey Hall of Fame members, American Cammi Granato and Canadian Jayna Hefford, coached their respective teams. The rosters were as follows:

Poulin and Knight were also featured in the NHL Shooting Stars event, where players shot seven pucks at numerous targets, but from an elevated platform approximately 30 feet above the ice. Among the 10 competitors, Poulin had the fourth-highest score of 15 points, while Knight tied for the fifth-highest score of 14 points.

The game consisted of two 10-minute periods and a running clock, with a three-minute sudden-death overtime period, followed by a shootout, if necessary. Less than one minute into the game, Johnston scored a breakaway goal on a feed from Agosta, drawing first blood and giving Canada a 1-0 lead. Both the Canadians and Americans had a plethora of opportunities in the first period, including Stecklein hitting the post on a semi-open net, but goaltenders Rigsby and Desbiens were stellar.

At the 2:25 mark of the second period, Daoust added to Canada’s advantage, beating Rigsby low on the stick side. However, Pankowski set up Knight for a partial breakaway, which resulted in Knight slipping the puck through Desbiens’ five-hole on her backhand and getting the Americans back to within a goal. The teams traded scoring chances during the game’s final minutes, but Desbiens’ glove save on Kessel as the horn went off secured a 2-1 win for Canada.

Both rosters were selected by the NHL after consulting with Granato, Cassie Campbell-Pascall, Angela Ruggiero and Hayley Wickenheiser. The game was officiated by Kelly Cooke, Katie Guay, Kendall Hanley and Kirsten Welsh.