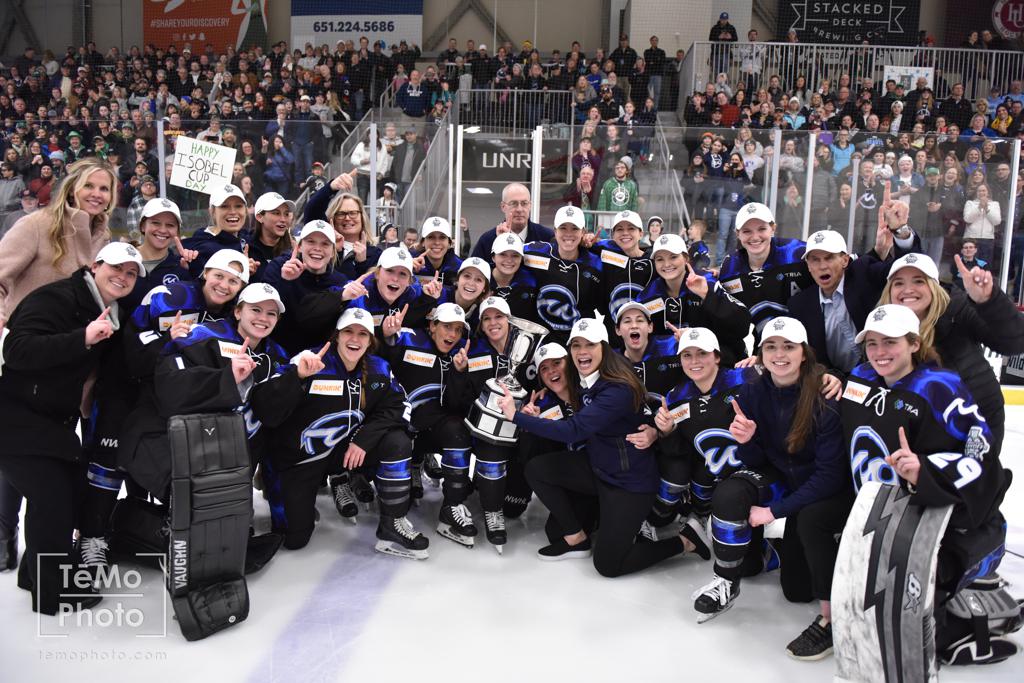 The Minnesota Whitecaps after they claimed the championship victory in overtime. (Photo courtesy of NWHL.zone.)

On Sunday, the Minnesota Whitecaps hosted the Buffalo Beauts in the 2019 Isobel Cup final at TRIA Rink. With home ice advantage and the top seed in the playoffs, Minnesota defeated the defending champion Metropolitan Riveters in the semi-final on Friday.

Late in the opening frame, Buffalo drew first blood on a goal from defender Emily Pfalzer. It was her second goal and third point of the playoffs, but it was not long until the Whitecaps responded. Less than two minutes later, Minnesota forward Amy Menke sniped the puck past Beauts goaltender Nicole Hensley and knotted the game 1-1.

Although Buffalo outshot Minnesota 8-5 in the first period, the Whitecaps would strike back by outshooting the Beauts 13-8 in the middle frame. By the end of regulation, Minnesota had outshot Buffalo by a total of 30-23. Both Hensley and Whitecaps goaltender Amanda Leveille were perfect in the final 40 minutes, resulting in overtime.

A mere 49 seconds into overtime, a point shot by Minnesota defender Lee Stecklein found its way through, beating goaltender Hensley and clinching an Isobel Cup victory for the Whitecaps. Following the team’s on-ice celebration, Stecklein was named the most valuable player of the NWHL playoffs, picking up two points in the final.

This is Minnesota’s second championship, as they won the Clarkson Cup in 2010 competing in the Western Women’s Hockey League. The Beauts have now competed in all four Isobel Cup final games, winning one in 2017. Since first being awarded in 2016, the NWHL has seen a different Isobel Cup champion each and every year.